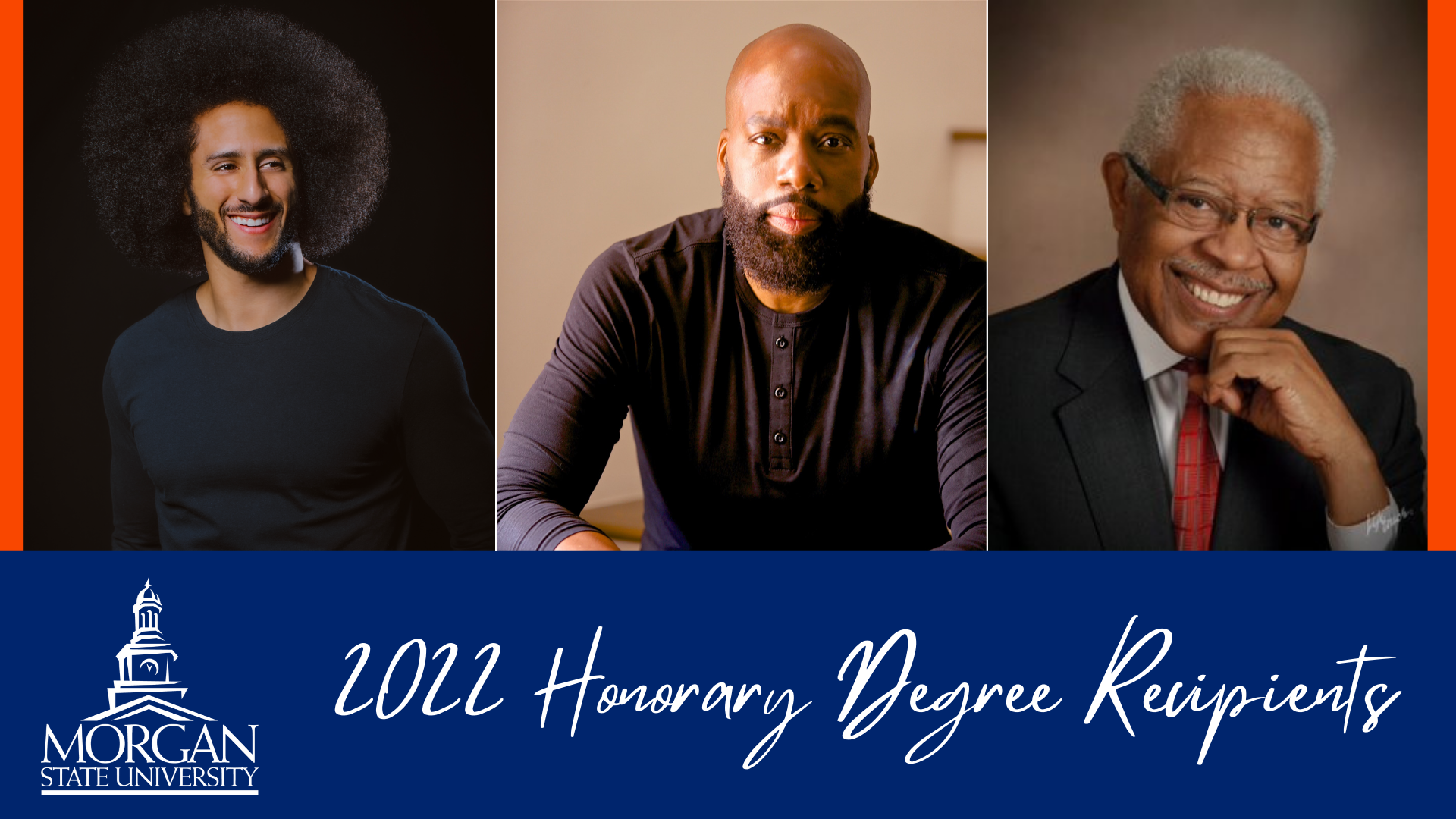 BALTIMORE — Morgan State University President David K. Wilson today announced that three exemplary vanguards of social justice and the African-American experience will be awarded honorary degrees during the 145th Spring Commencement ceremony taking place at Hughes Memorial Stadium on Saturday, May 21. At the ceremony, the University will bestow honorary degrees to acclaimed Morgan alumnus and filmmaker David E. Talbert, who was previously announced as the commencement keynote; Morgan alumnus David Burton, the chief proponent in the landmark Coalition for Excellence and Equity in Maryland Higher Education (HBCUs) vs. the State of Maryland lawsuit; and Super Bowl quarterback and champion for social justice, Colin Kaepernick.

“Leadership, Integrity, Innovation, Diversity, Excellence and Respect are more than just words that appear on the flags that adorn our campus, or words that we utter casually when reciting our core values, they represent the embodiment of who we are and what a Morgan graduate stands for,” said President Wilson. “With this notion in mind, we intentionally sought a collection of individuals who truly embody these principles, and thankfully we have assembled a trio of diverse voices who have bravely stood—and kneeled—for the betterment and advancement of the voiceless, the marginalized and the disenfranchised.”

Trailblazers within their respective fields and causes, Morgan’s honorary degree recipients have uniquely impacted the trajectory of the African-American story on the stage and screen, in higher education and the corporate arena, as well as on the field and in the community.

“We are absolutely thrilled to bestow honorary degrees to David E. Talbert, David Burton and Colin Kaepernick for their individual, and collective, contributions to the progression of the Black narrative and pursuit of excellence,” added Wilson. 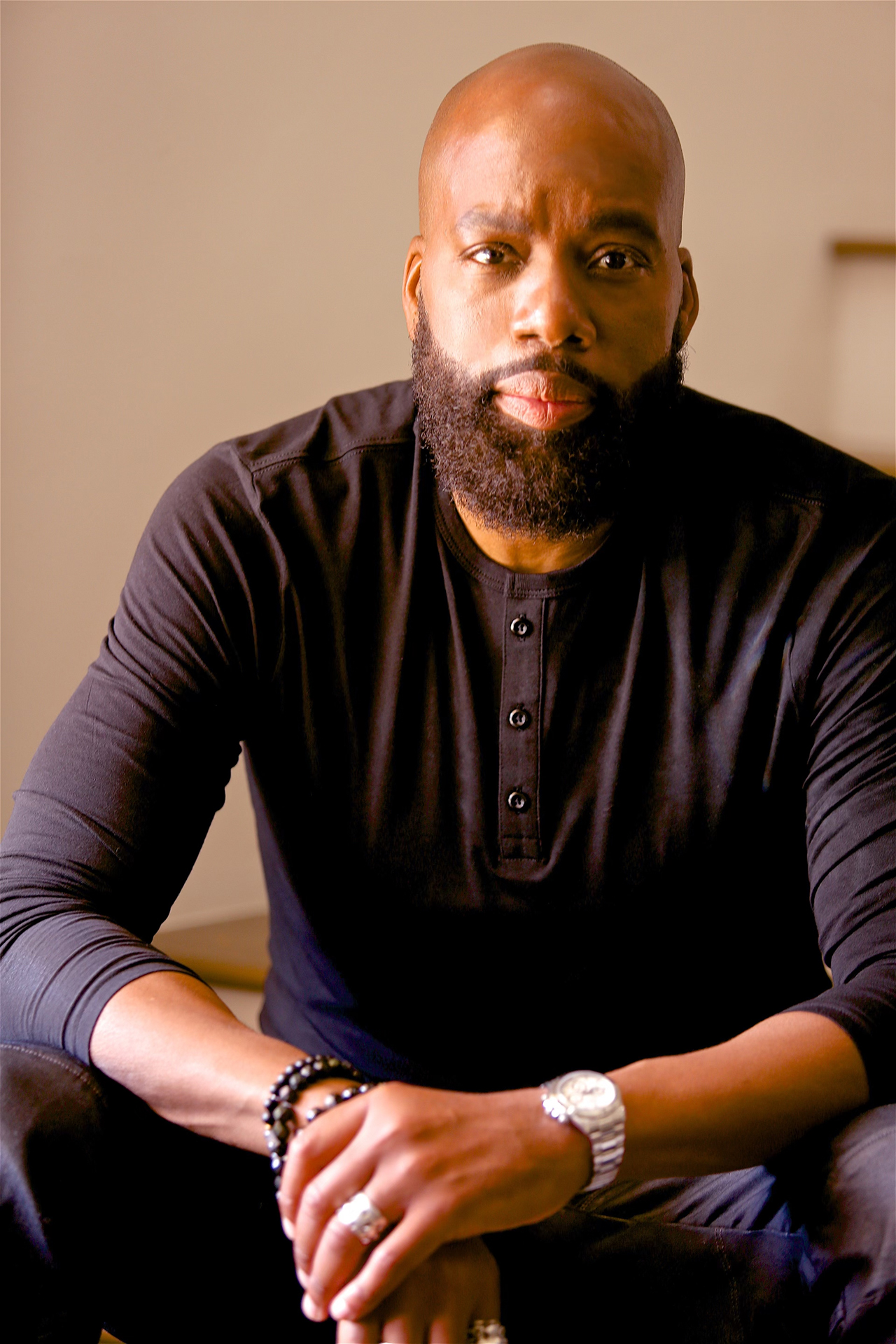 Receiving an honorary Doctor of Fine Arts degree, David E. Talbert is heralded as one of the most prolific theater-makers in America, haven written and produced 14 national tours, surpassed box office records and captured the hearts of audiences around the world. Talbert earned his bachelor’s degree in marketing from Morgan State University in 1989 and later attended New York University’s accelerated film program. He has garnered 24 NAACP nominations, winning the NAACP Trailblazer Award; and for his contributions and accomplishments in theatre, Talbert was named Best Playwright of the Year for “The Fabric of a Man,” and received the New York Literary Award for Best Playwright of the Year for his musical “Love in the Nick of Tyme.”

Most recently, Talbert celebrated the pinnacle of an already fruitful cinematic career, with “Jingle Jangle: A Christmas Journey,” Netflix’s first original live-action musical, which Talbert wrote, directed and produced. This 20-year passion project and brainchild of Talbert bore a completely original and inclusive cinematic holiday experience that was viewed in more than 190 countries and translated into 32 languages. “Jingle Jangle” was nominated for 10 NAACP Image Awards and shortlisted by the Academy for Oscar contention.

David Burton, founder and CEO of the Diverse Manufacturing Supply Chain Alliance (DMSCA) and DMSCA Supplier Development Foundation, will receive the honorary Doctor of Humane Letters degree. A lifetime member of Alpha Phi Alpha Fraternity, Inc., Burton received his Bachelor of Science in Psychology from Morgan in 1967, and a master’s degree from the University of Pennsylvania in City Planning and Regional Science.

Years after his matriculation at Morgan, Burton’s fidelity to alma mater would forever be forged into the annals of its history as a key stakeholder and equity defender in what would become a transformative litigation and eventual legislation. Burton served a pivotal role in the now landmark Coalition for Excellence and Equity in Maryland Higher Education (HBCUs) vs. the State of Maryland lawsuit which sought to right decades of inequity and underfunding of Maryland’s Historically Black Colleges and Universities (HBCUs). Through his perseverance and leadership in this effort, the four Maryland HBCUs—including Morgan—received an historic $577-milllion settlement by way of passed state legislation.

Having previously served on the Obama Administration’s Small Business Advisory Council, Burton presently serves on the Advisory Board of Morgan State University’s Supply Chain Management and Information Systems Department, in the Earl G. Graves School of Business and Management, and on the Advisory Board of the Morgan State University Robert M. Bell Civil Rights Center. During the span of his professional career, he has received numerous recognitions, included among them the Frank R. Parker Client Award from the Lawyers Committee for Civil Rights Under Law and the U.S. Department of Commerce Minority Business Development Administration’s “Making A Difference Award” in appreciation for his dedication in ensuring inclusion of minority manufacturing participation in U.S. supply chains.

Burton served as a Regular Army Captain and is a decorated Vietnam veteran. He has a vast amount of experience in community and economic development, small business incubation and inner-city revitalization which he has utilized for the betterment of his community. Super Bowl quarterback Colin Kaepernick will receive an honorary Doctor of Humane Letters degree capping the trio of honorary degrees awarded at Morgan’s 145th Spring Commencement Exercises. The holder of the all-time National Football League (NFL) record for most rushing yards in a game by a quarterback, Kaepernick famously took a knee during the playing of “The Star-Spangled Banner” in 2016 to bring attention to systemic oppression — specifically police violence — of Black and Brown people. For his stance, he has been denied the opportunity to regain his employment within the NFL to this day.

Since 2016, he has founded and helped to fund three organizations — Know Your Rights Camp, Ra Vision Media, and Kaepernick Publishing — that together advance the liberation of Black and Brown people through storytelling, systems change and political education.

Kaepernick sits on Medium’s board of directors and is the winner of numerous prestigious honors, including Amnesty International’s Ambassador of Conscience Award, the Robert F. Kennedy Human Rights Ripple of Hope honor, GQ magazine’s “Citizen of the Year,” the NFL’s Len Eshmont Award, the Sports Illustrated Muhammad Ali Legacy Award, the ACLU’s Eason Monroe Courageous Advocate Award and the Puffin/Nation Institute’s Prize for Creative Citizenship. In 2019, Kaepernick helped Nike win an Emmy for its “Dream Crazy” commercial. In 2021, he released Colin in Black & White, a six-episode limited series on Netflix exploring his high school years. The show won two NAACP Image Awards. In 2022, he became a New York Times bestselling author for his acclaimed children’s picture book, “I Color Myself Different.”

EDITOR’S NOTE: Individuals receiving honorary degrees may not be present at the ceremony.