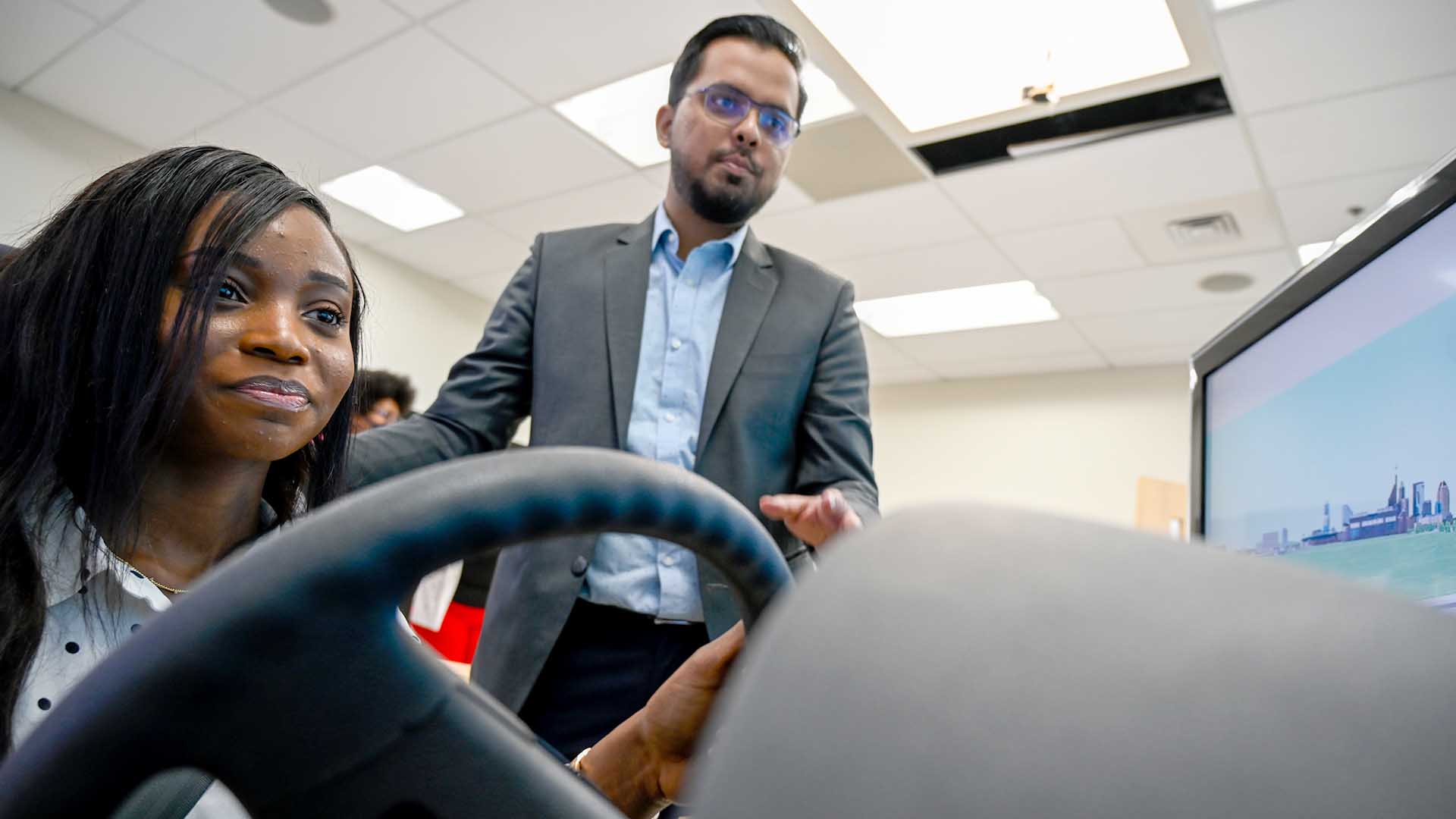 When Mansoureh Jeihani, Ph.D., came to Morgan’s faculty in 2007, the National Transportation Center at Morgan State University was already in its 15th year. Dr. Jeihani, a new professor of transportation, had seen her strong interest in computer engineering evolve into a passion for transportation research, and for empowerment of women and people of color, during her 16-year journey through higher education in her home country of Iran and at Virginia Tech. At Morgan, she leaped at the research opportunities provided by the National Transportation Center (NTC), which was then headed by its founding director, Z. Andrew Farkas, Ph.D. 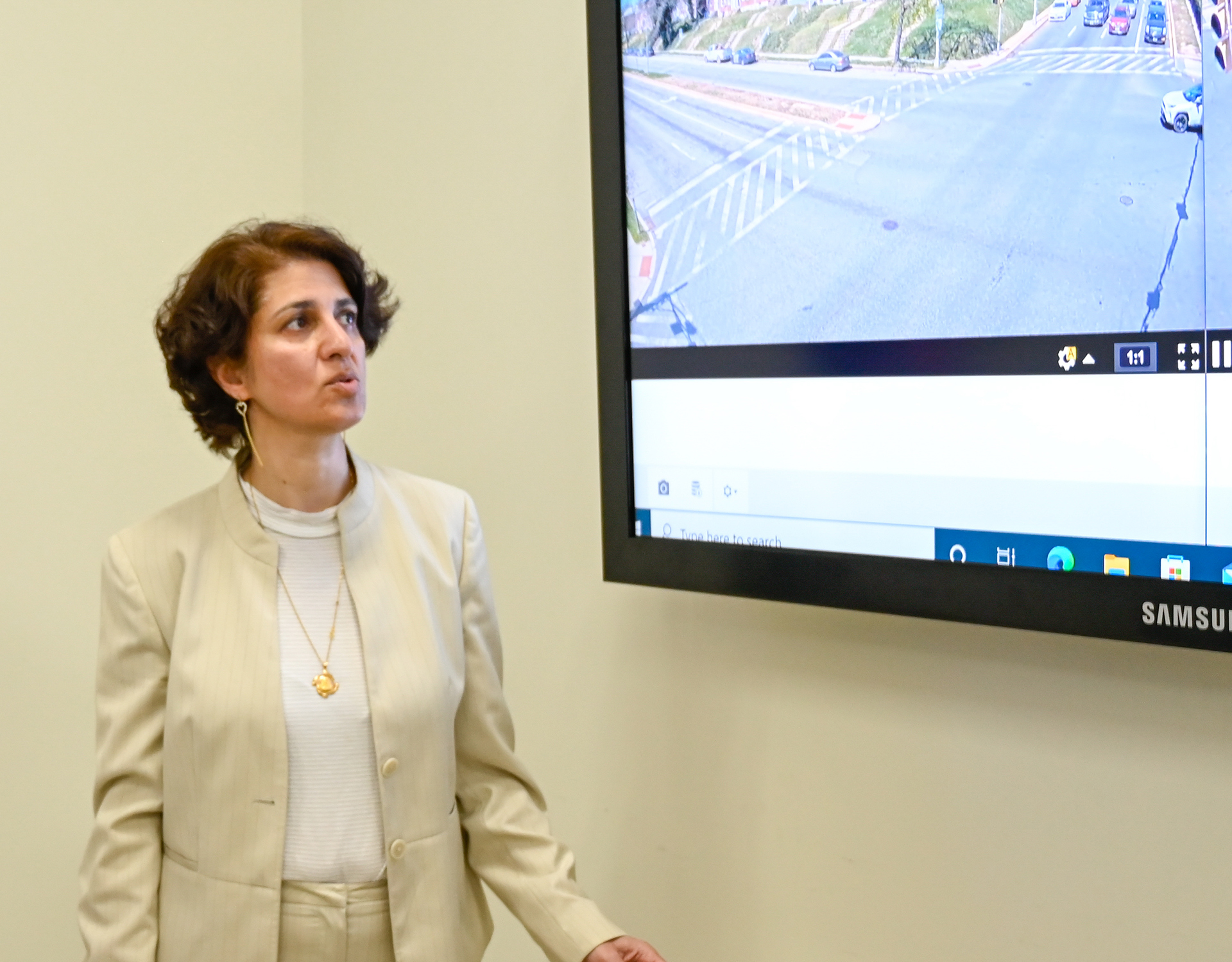 “Transportation is part of everyone’s life every day, when we are faced with traffic issues, supply chain issues. That’s why, to me, it was something interesting and something I wanted to do something about, especially the congestion and urban transportation problems…,”says Dr. Jeihani. “My goal was to be in academia, to be a professor, and I preferred to be in a minority school. I was hired by Morgan’s Department of Transportation, and I got involved with the National Transportation Center right away. I did several research projects and then started expanding, and asking for creation of a lab, which I initiated in 2012, the Safety and Behavioral Analysis Center.”

This year, the NTC is celebrating its 30th anniversary, a milestone highlighted by a two-hour visit to the center by U.S. Secretary of Transportation Pete Buttigieg on April 20, and Dr. Jeihani is enjoying her third year as the center’s director, as it conducts its innovative work around the theme, “Transportation: A Key to Human and Economic Development.” The NTC at Morgan State University, one of only 35 University Transportation Centers nationwide, was established by the United States Congress under the Intermodal Surface Transportation Efficiency Act of 1991. Supported by earmarked funds from its opening in 1992 until 2012, the NTC has thrived at Morgan since then through the University’s successful nationwide competition against other higher education institutions. The center’s current research focus areas include connected and autonomous vehicles; transportation and traffic modeling; safety and distracted driving; and transportation equity. 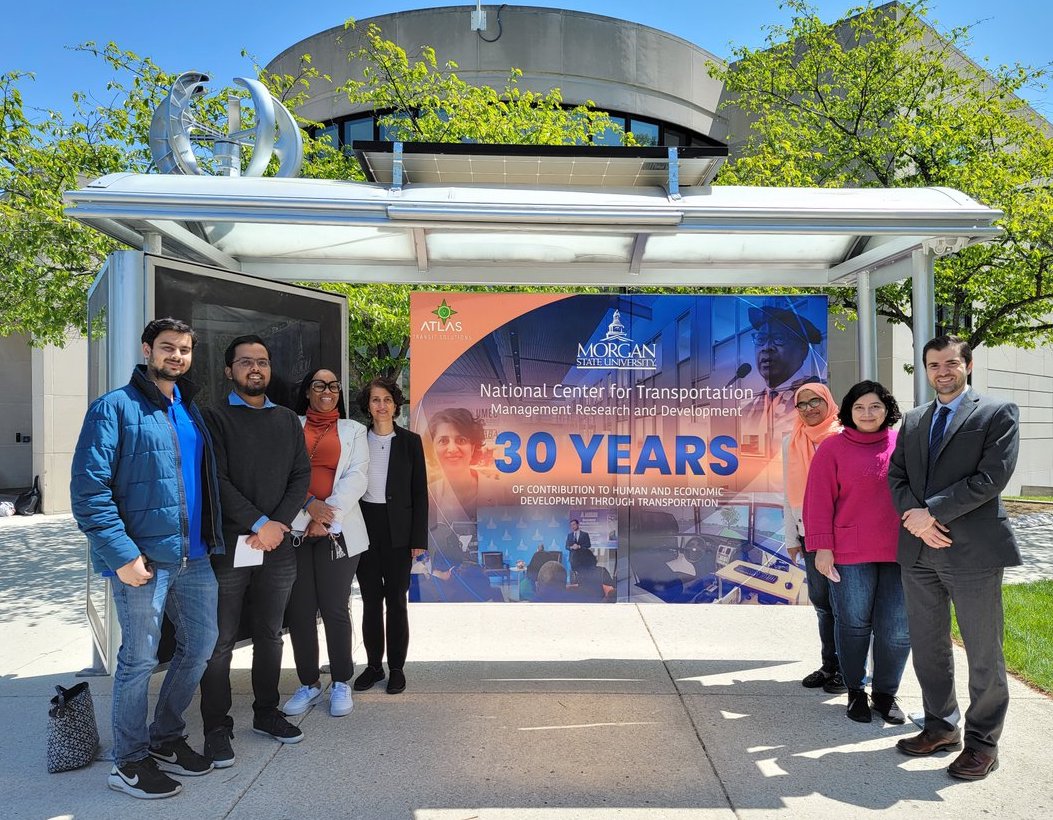 The center’s growth and achievements have mounted at an increasing rate through the years. During the last three decades, the NTC has completed 117 research projects with total funding of approximately $40 million and has published 160 journal articles, conference papers and technical reports in the last five years alone. In 2016, the NTC founded a second subunit, the Urban Mobility & Equity Center, a multi-university partnership, led by Morgan, that “conducts research to improve urban mobility of people and goods in an environmentally sustainable and equitable manner.”

Technology transfer — development of ideas initiated at NTC into products and processes for broad use — has accelerated greatly during the past decade. The center has two current utility patents and four provisional patents, with more on the way. An autonomous wheelchair created by the center will soon be tested at BWI Thurgood Marshall Airport, taking disabled travelers from the airport arrival areas to the gates. A COVID-19 dashboard recently made by researchers at the NTC is designed to show policy makers the effect of the illness on transit riders in different cities, including Baltimore. A “mixed traffic connected autonomous vehicle infrastructure” launched at an intersection on Morgan’s campus this April enables vehicles to communicate with each other and may be used to enhance safety and transportation equity far and wide.

The center recently won two prestigious honors: the Council of University Transportation Center awards for Leadership in Workforce Development and for Technology Transfer, in 2020.

Celeste Chavis, Ph.D., is one of the faculty researchers enhancing society through her work with the NTC. The Ohio State University and University of California, Berkeley-educated civil engineer was drawn to the National Transportation Center at Morgan as she decided between a career in management consulting or academia, after she had earned her doctorate at UC Berkeley in 2012.

“I was surprised and happy to see an HBCU that had a federal research center, and that really was like the driving force for me reaching out and putting in an application here,” says Dr. Chavis, who is now an associate professor in two departments at Morgan: Transportation and Urban Infrastructure Studies, and Civil Engineering. Dr. Chavis’ recent research focuses on “transportation operations, safety, and performance metrics for multimodal transportation systems through an equity lens,” and her work for the NTC has been diverse, ranging from creation of the center’s COVID dashboard, with Dr. Jeihani; to a study of the interaction of pedestrians and cars, with Morgan electrical and computer engineering professor Kofi Nyarko, Ph.D.; to a project examining grocery store access for people in Baltimore City who don’t have cars; among others.

After the grocery access project, “I was able to be the external evaluator for Baltimore City’s pilot with Lyft, where they provided subsidized rides to grocery stores to residents in west and south Baltimore,” Dr. Chavis says. “I think that’s a good example of how research translates into action in a city.”

Dr. Chavis credits the NTC with getting her started as a new researcher and with helping her gain positions to influence transportation policy, as co-chair of Baltimore Mayor Brandon Scott’s Transportation and Infrastructure Transition Committee and as executive board vice president for the Central Maryland Transportation Alliance.

The NTC has made a real impact on Baltimore City and on Maryland, Dr. Chavis says: “It’s brought research dollars to the city that we would not have had. Much of the work that we do is Baltimore-based, so that has provided an infusion of new ideas, new work and also money into transportation research here in the city.”

Like Dr. Chavis, Morgan Transportation and Urban Infrastructure Ph.D. student Ramina Javid was drawn to Morgan by its National Transportation Center and has thrived on the center’s research opportunities. As a master’s degree student wrapping up the urban planning program at Shahid Beheshti University in her home country of Iran, she was seeking Ph.D. programs in transportation, and Morgan stood out.

“What made this program special for me was that I never saw any other university that had a program named Transportation at the Ph.D. level,” Javid says. “Also, I saw that Dr. Jeihani, my supervisor, had the SABA Center lab, which has a driving simulator, and I was very interested in working with that. And another thing was that in my master’s degree program, I was very interested in equity and focusing on people with disabilities and low-income people, and Morgan’s NTC also had that focus.”

Javid has contributed to an impressive array of research projects during her year and a half at Morgan. Her ultimate goal is to teach transportation at the university level, but the research she’s done at NTC — in the areas of distracted driving, vehicle occupant protection, biking and walking activities for low-income African Americans and development of a robotic dog for people with visual impairment — has fired her interest in that aspect of the job of professor as well. Queneia Harley-Burkeen leads the NTC’s workforce development initiatives for students in grades 6–12, and has experienced personal growth also, as education/communications manager for the center since January 2020. Previously a teacher in Baltimore County and Baltimore City public schools, she runs the center’s National Summer Transportation Institute (NSTI).

“This summer we’ll be celebrating our 25th anniversary (at NSTI),” says Harley-Burkeen. "This program was specifically designed for middle school and high school students to be exposed to everything of and related to transportation. We focus on exposing students to the diverse professional opportunities that they can take advantage of if they come here to Morgan to get their education, major in transportation and go out into the workforce. Students genuinely don’t know that there is so much to transportation, so many professional transportation engineering opportunities. Ultimately, what we want to do is pique their interest and curiosity in transportation engineering and have them come here to study with us and then go out into the workforce.”

First-year Morgan computer science student Abisola Arowolaju is gaining transportation knowledge and work experience by another route, as an employee of the NTC. Born in Ekiti State, Nigeria, Arowolaju came to the U.S. five years ago and was a top graduate at Wayne County Community College before changing her career goal from nursing to computer science and enrolling at MSU. Her work collecting digital data for the center is moving her toward her goal.

“Dr. Easaz (Easaz Sadeghvaziri, Ph.D., postdoctoral research associate at the UMEC) reached out to me to ask if I was interested in taking a job at the center. I was open to learning new things, and I was looking for a way to integrate my computer science knowledge into transportation. My goal is to learn a lot of diverse things, become a software engineer and one day begin my own start-up company that develops software that helps transportation.”

Dr. Jeihani and the NTC have near-term growth and expansion plans of their own. Its place in the Urban Mobility & Equity Center makes Morgan one of only two HBCUs leading a Tier 1 University Transportation Center. In the next round of competitive proposals, “we plan to step up from Tier 1 to a Regional Transportation Center,” Dr. Jeihani says. “We have seven other universities in the Mid-Atlantic Region on our team, with Morgan as the lead.”