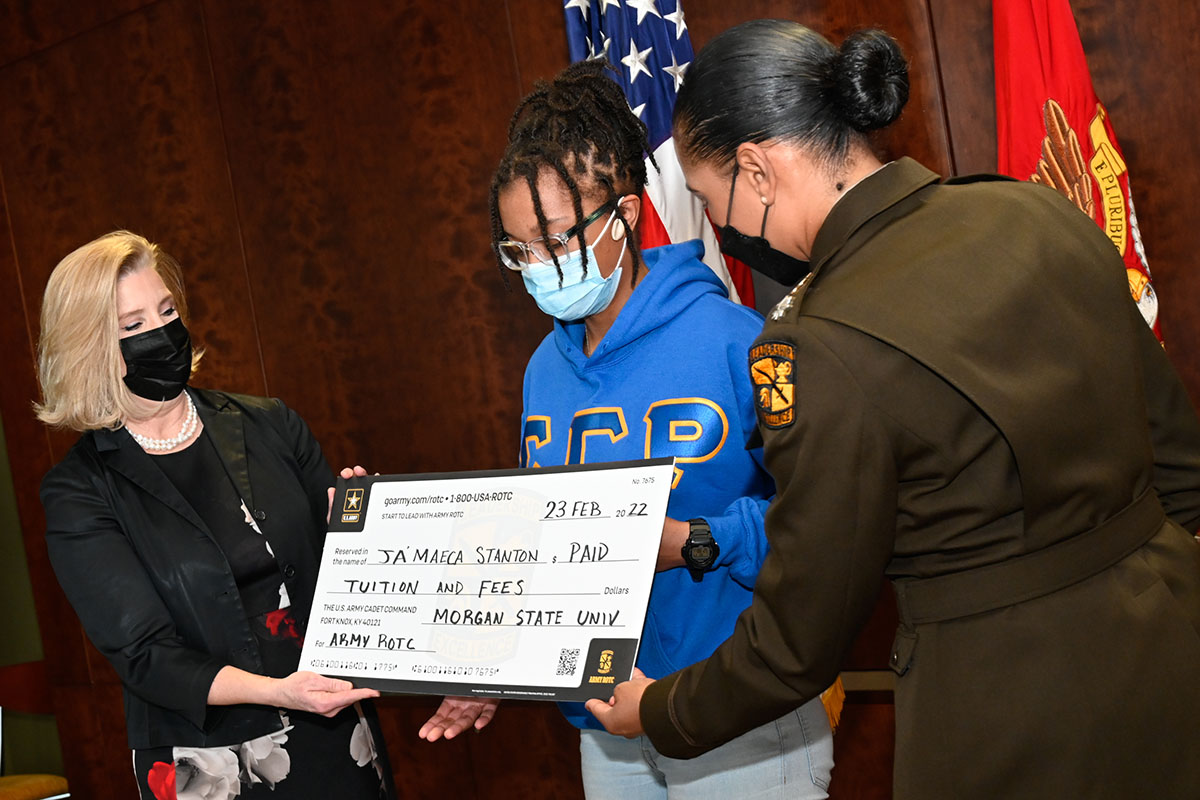 Morgan Research and Leadership Take Center Stage During Secretary of the U.S. Army Christine Wormuth’s Visit to the National Treasure

As U.S. Army secretary, Wormuth is the top-ranking civilian Department of Defense (DoD) official responsible for all matters relating to the oldest and largest branch of the nation’s military. She is the first woman to hold the post. 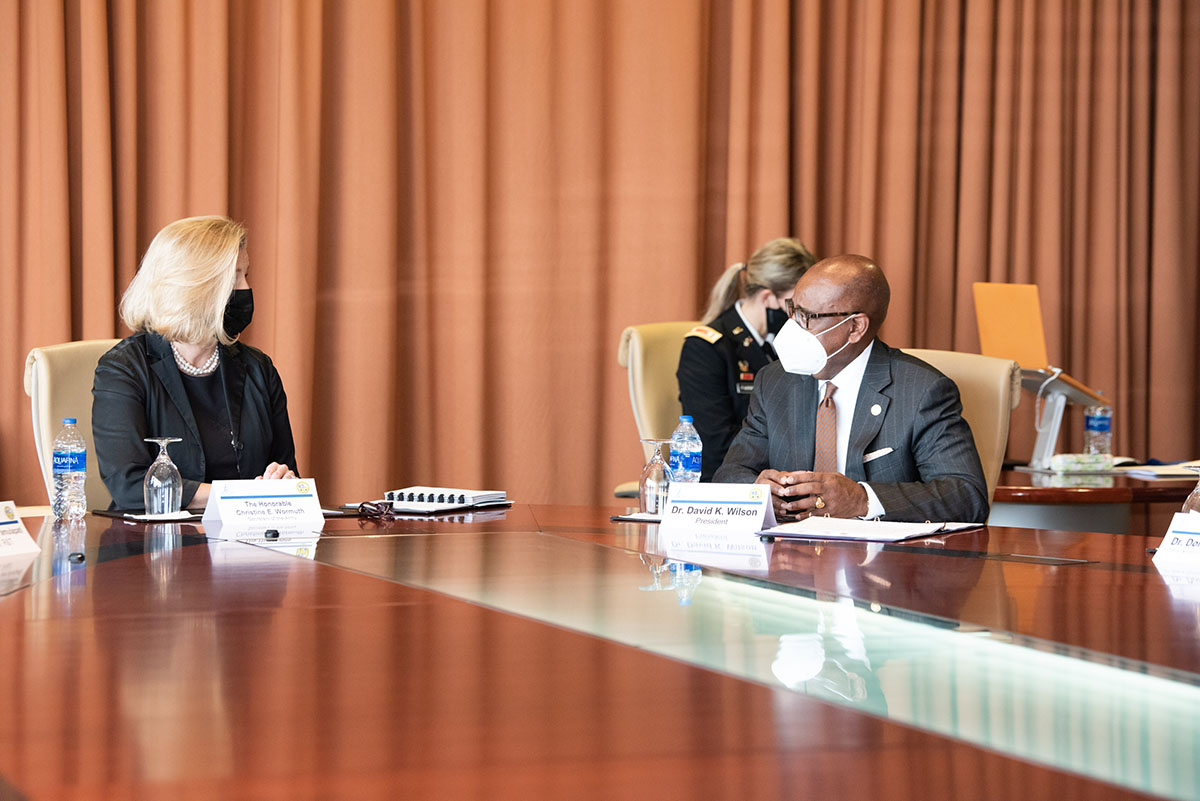 “We are very honored to host the Secretary of the Army, and be presented with this extraordinary opportunity for her to directly engage with our faculty and students,” said MSU President David K. Wilson. “Morgan leadership is on full display — leadership in the laboratory, in the research space and in our commitment to service by way of our Reserve Officers’ Training Corps. We look forward to broadening our discussions with Secretary Wormuth as we pursue mutually beneficial opportunities for future joint initiatives.”

Wormuth said she found Morgan to be “incredibly dynamic. I had the opportunity to go to the Dixon Science Center and see a number of students working on really fascinating research projects, things that didn’t even exist when I was in college, (using) very sophisticated equipment at the undergraduate level, which is quite impressive.”

Electrical engineering senior Kirsten Toland was one of the students who impressed, with a presentation about her research group’s work in fabricating devices, such as solar cells, for very thin films, and devices that control the temperature of radars and the spin and mobility of helicopters in windy conditions. 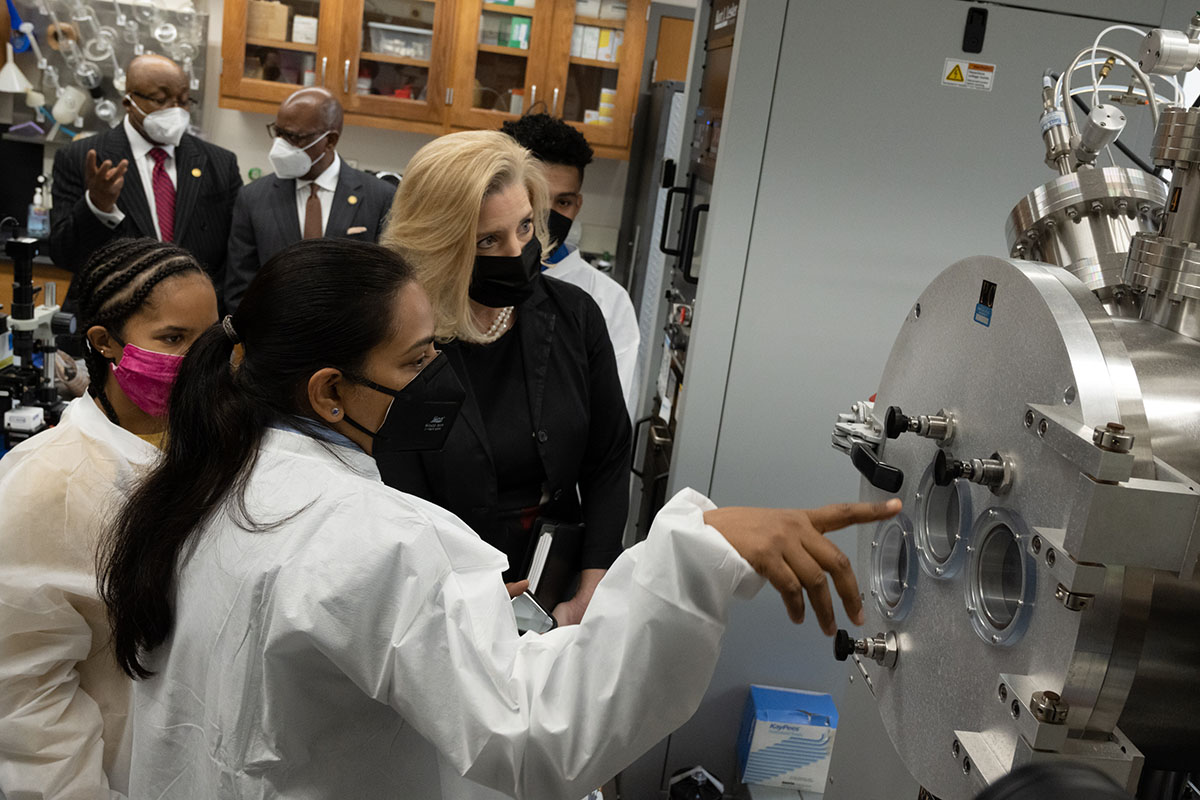 “(Secretary Wormuth) was really interested in what I had to say…so that made me feel what I’m doing is really important and that she really enjoyed having me speak to her about the research that I’m spending so much time on,” said Toland.  A native of Baltimore City, Toland has interned with Northrop Grumman Corporation for more than five years and is looking forward to her internship with Boeing in Everett, Washington, this summer. “I hope (Secretary Wormuth’s visit) will put Morgan on the map more and that more students will want to come to Morgan to get a world-class education,” she continued. “And then I hope more people will see that it’s worth investing in Morgan, so students like me are able to be excited about going into industry.”

“We are currently funding some work in research here at MSU that I think can be useful for the Army as we look at future technologies for our soldiers,” Wormuth continued. “And so seeing how Morgan State can support that and be a part of that and how the students can be a part of that was very interesting. And I think we’re going to work to keep building on that. Looking at the ROTC programs here and the JROTC programs in the local community, the Army really wants to reach out and both explain what we offer to young Americans in the Baltimore area and also bring in the best and brightest. So this was an opportunity to do that as well.”

Morgan alumna Charneta Samms , the recently appointed chief technology officer of the U.S. Army Combat Capabilities Development Command, joined Wormuth for the visit and was likewise impressed by what she saw.

“It is amazing…how much the campus has expanded and grown,” said Samms, who received a Bachelor of  Science in Industrial Engineering at MSU in 1996 and a Master of Industrial and Systems Engineering at Virginia Tech. Samms represents another Army first: she is the first permanent CTO of the command, commonly known as DEVCOM, which is the Army’s largest technology developer.

“As chief technology officer, I am representing the U.S. Army Combat Capabilities Development Command on behalf of my commanding general. And as a Morgan alum, it’s my honor to do that,” Samms said. “I’m here to talk about how we can do a better job of connecting HBCU graduates to the work that we do.”

The agenda for the high-level visit included a presentation on research in progress at Morgan’s Center of Excellence for Advanced Electro-Photonics with Two-Dimensional Materials, by the center’s principal investigator, Ramesh Budhani, Ph.D., professor of physics at MSU. Jagadeesh Pamulapati, Ph.D., acting deputy director for Research, Technology and Laboratories in the Office of the Under Secretary of Defense for Research and Engineering, addressed the group about the potential for greater investment in HBCUs by the Defense Department.

“Morgan’s ascendency as a valued partner for R&D and providing infrastructural support in both the private and public sector is a testament to the innovation happening here, and that’s certainly reflected in the projects Secretary Wormuth and her team saw today,” commented Willie E. May, Ph.D., vice president for Research and Economic Development (D-RED) at Morgan. 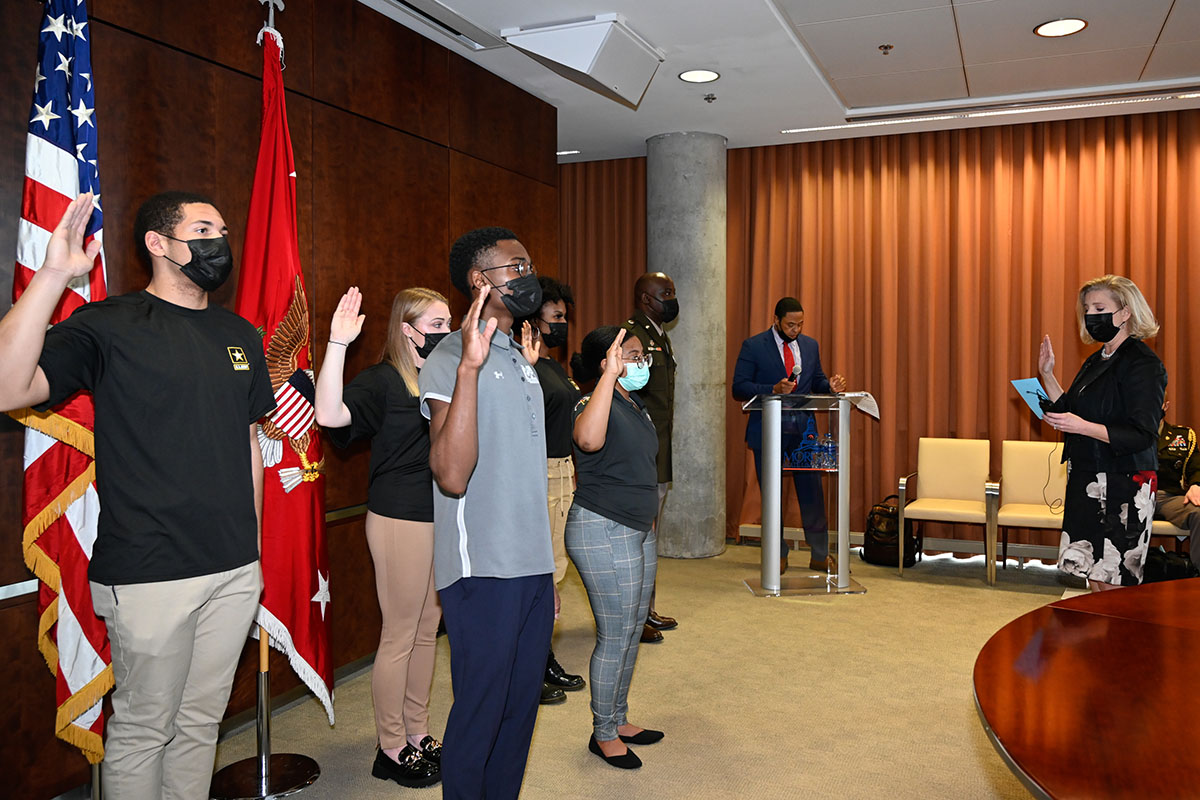 After-lunch events included a tour of Morgan’s ROTC facilities and a discussion between Secretary Wormuth and a small group of cadets on the topic “Why I Serve.”

“I think the event went extremely well,” said Lt. Col. Malikah Morgan, head of the ROTC Bear Battalion and chair and professor of Military Science at MSU. “The secretary was very happy to see not only the University and what we’re offering in terms of technology for (Department of Defense) efforts in the Army, but she was happy to see her total force: she had a chance to interface with Baltimore City JROTC students, with Future Soldiers who were swearing-in to be enlisted in the National Guard or the Reserves, and with Army ROTC. And her second portion of the day, when she had a chance to interface with ROTC cadets, gave her a true understanding of not only ROTC but ROTC for Historically Black Colleges and Universities.