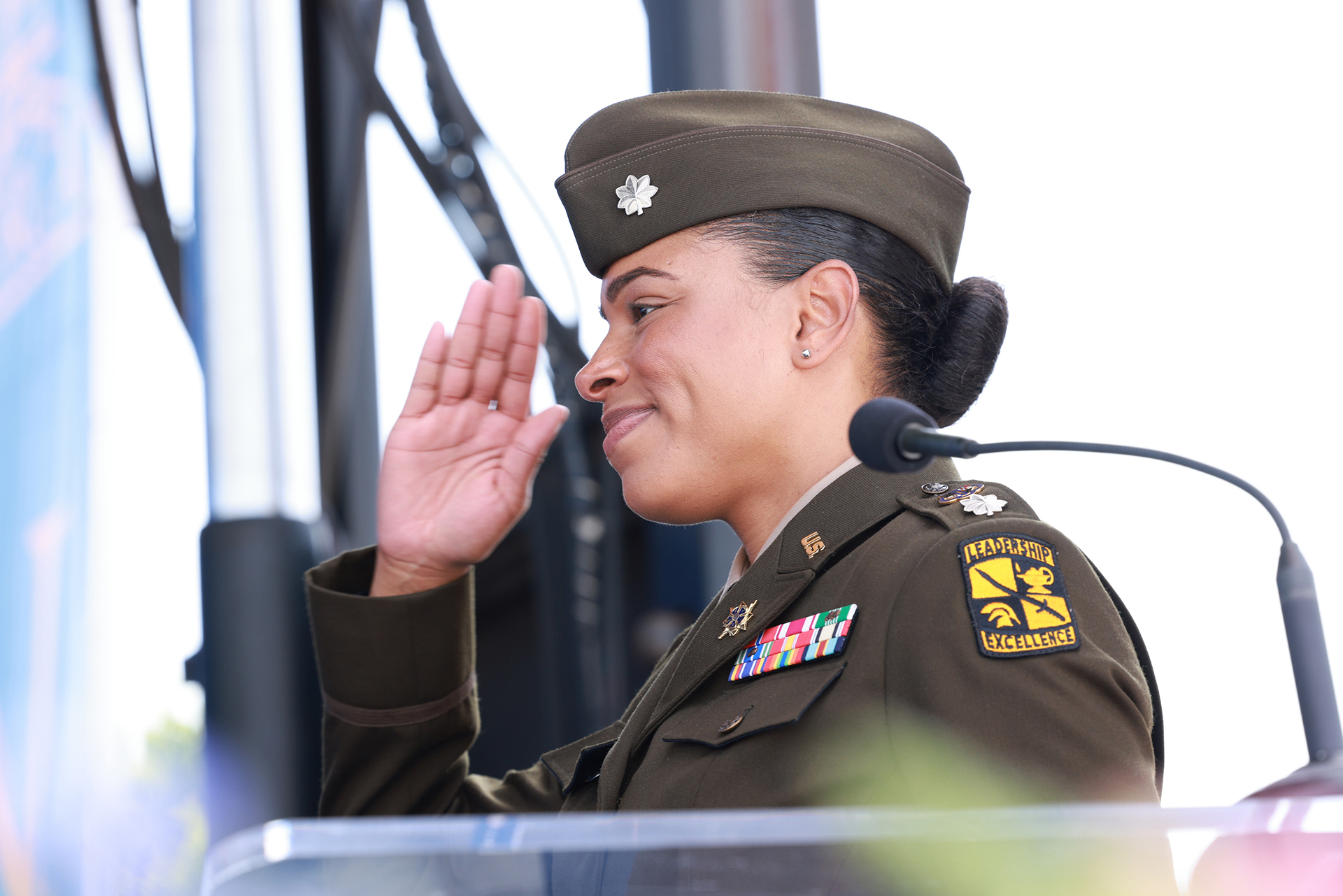 Achievement by Grit and Grace

“I felt like Morgan truly cared. It was a true commitment, from the administration to the faculty to the extracurricular activities and the ROTC and student government. I had an amazing experience.” 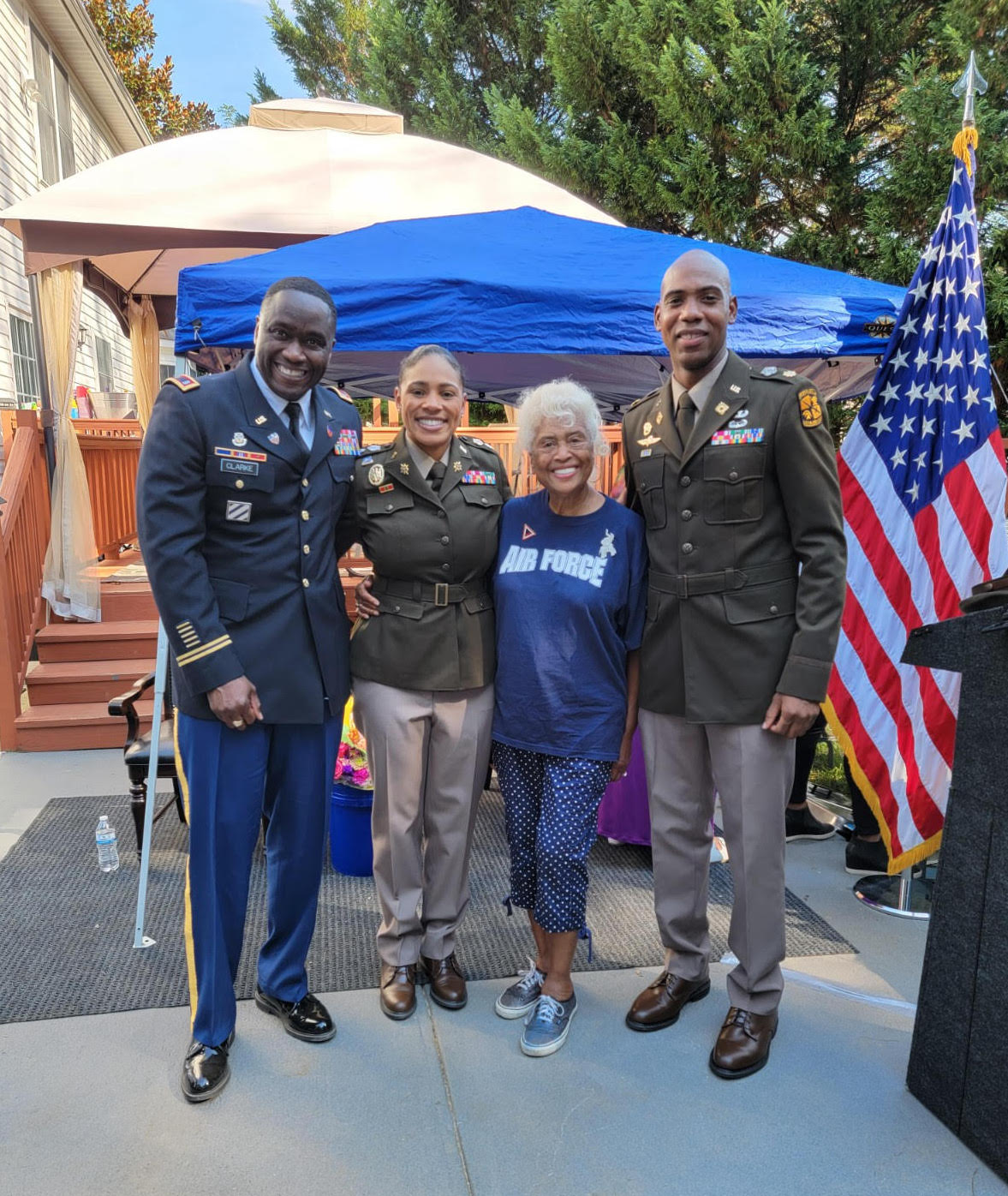 Lt. Col. Malikah Morgan, U.S. Army, bears a physical mark that well defines her character and her life. The youngest of two children born and raised in the small shore town of Neptune, New Jersey, she explains why she carries herself like a natural leader.

“I am the baby, but I guess I was influenced by the expectation of my mother,” she says. “My mother was hard on me with grace and love. I’ll always have grit, and grace above all, because this career requires both. I actually have ‘Grit’ and ‘Grace’ tattooed on my ribs, where I knew it would hurt the most, because even when you’re experiencing pain or an upset, both grit and grace are required at different times to keep you going.”

Promoted from major last July, Lt. Col. Morgan, a 2005 ROTC graduate of Morgan State University (MSU), was honored for that achievement this past fall during a ceremony held at her home. Morgan comes from a family distinguished by its service in government and the military.  As chair and professor of Military Science at MSU, she became the first woman and the 24th person to serve in this role, upon joining the University faculty in 2020. Her appointment is for a term of three years.

As head of the ROTC Bear Battalion of Morgan State and Coppin State Universities, she leads a program that produces more commissioned African-American officers than any other college or university program in Maryland. More than 51% of the office candidates in the Maryland National Guard come out of the Bear Battalion. 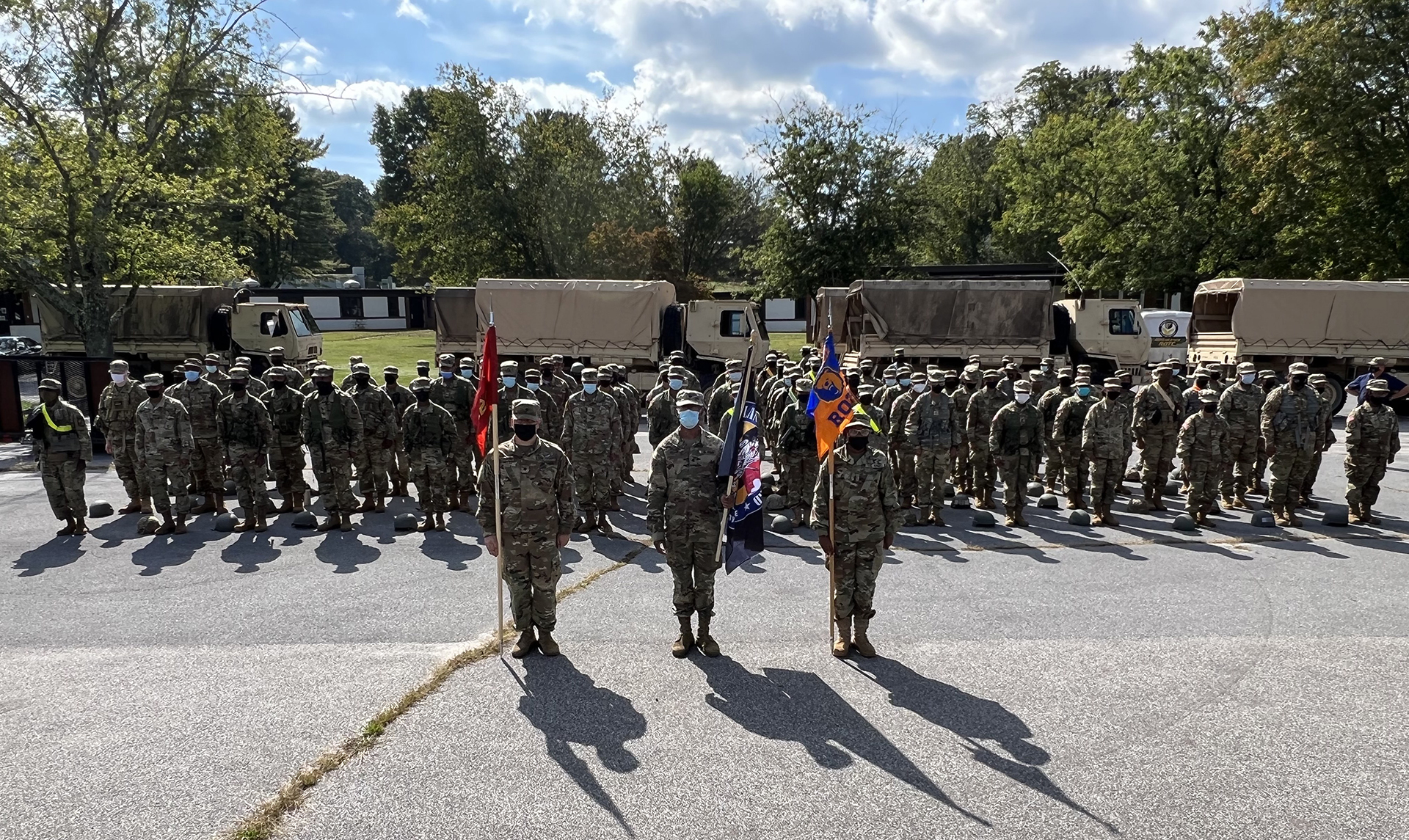 Lt. Col. Morgan showed her grit early in life. When she was a freshman in high school, her mother, then a single parent, moved the family to a townhome “on the hill” in Neptune, between the single-family, detached homes in the more affluent neighborhoods “up the hill” and the lower-income neighborhoods “down the hill,” in the small, racially diverse town.

“So I kind of grew up between those worlds…” surrounded by family, she recalls. Morgan’s uncle was Neptune’s chief of police. Her aunt worked for the local post office. Her many cousins lived in the town within a mile of each other. Her mother worked for the New Jersey Motor Vehicle Commission and later for the state’s child protection and child welfare agency. Morgan’s stepfather, an enlisted soldier, married her mother years after the family’s move, in 2000.

“My mother always said, ‘Once you’re 18, you’re gonna get a trade, you’re gonna join the Army, or you’re gonna go to college. There’s nothing in between. So, work hard in high school, ’cause you will not be staying here living off of me once you graduate.’ We did not grow up with means, so there was no college fund. There was no way for us to pay for college, so she was very adamant about getting good grades and trying to find a way to get a scholarship.”

As a result, “in high school, I was very, very driven and overly focused,” Lt. Col. Morgan says with a laugh. “…I worked a lot. I worked at the local ShopRite, our grocery store, and I swam on my high school team, and I was cheerleading captain. I was student government president. I was the Junior ROTC battalion commander. And I got very good grades.”

As high school graduation neared, Morgan joined Jack and Jill’s college tours to visit the HBCUs throughout the Eastern Seaboard, and she fell in love with MSU. Then her mother’s counsel paid off for her, as it had for her brother: “He ended up going to Bethune Cookman on a band scholarship, and I ended up coming to Morgan and getting a campus base ROTC scholarship.”

Lt. Col. Morgan says she loved her time as an undergraduate at MSU. A photo in her office bearing the label “Friends for Life” shows her with most of the small group of young women she bonded with during their freshman year in Blount Towers and who encouraged each other to stay focused on academics and graduation.

She also stayed involved with campus life, serving as freshman, sophomore and senior class president. ROTC at Morgan became a second home for her. She joined Delta Sigma Theta Sorority. And she remembers professors who would call her on her cellphone if she missed class.

“I felt like Morgan truly cared,” she says. “It was a true commitment, from the administration to the faculty to the extracurricular activities and the ROTC and student government. I had an amazing experience.”

But even so, Lt. Col. Morgan admits, as a new MSU graduate and newly commissioned Army officer, she was far from being the dedicated soldier she is today. Young, in love and newly married to a fellow Morgan graduate, she says, she had a vision of her future that was firmly centered on her spouse. “At that point, my career plan was to do four years in the Army, get out, get a great job in the DMV and be a civilian.” 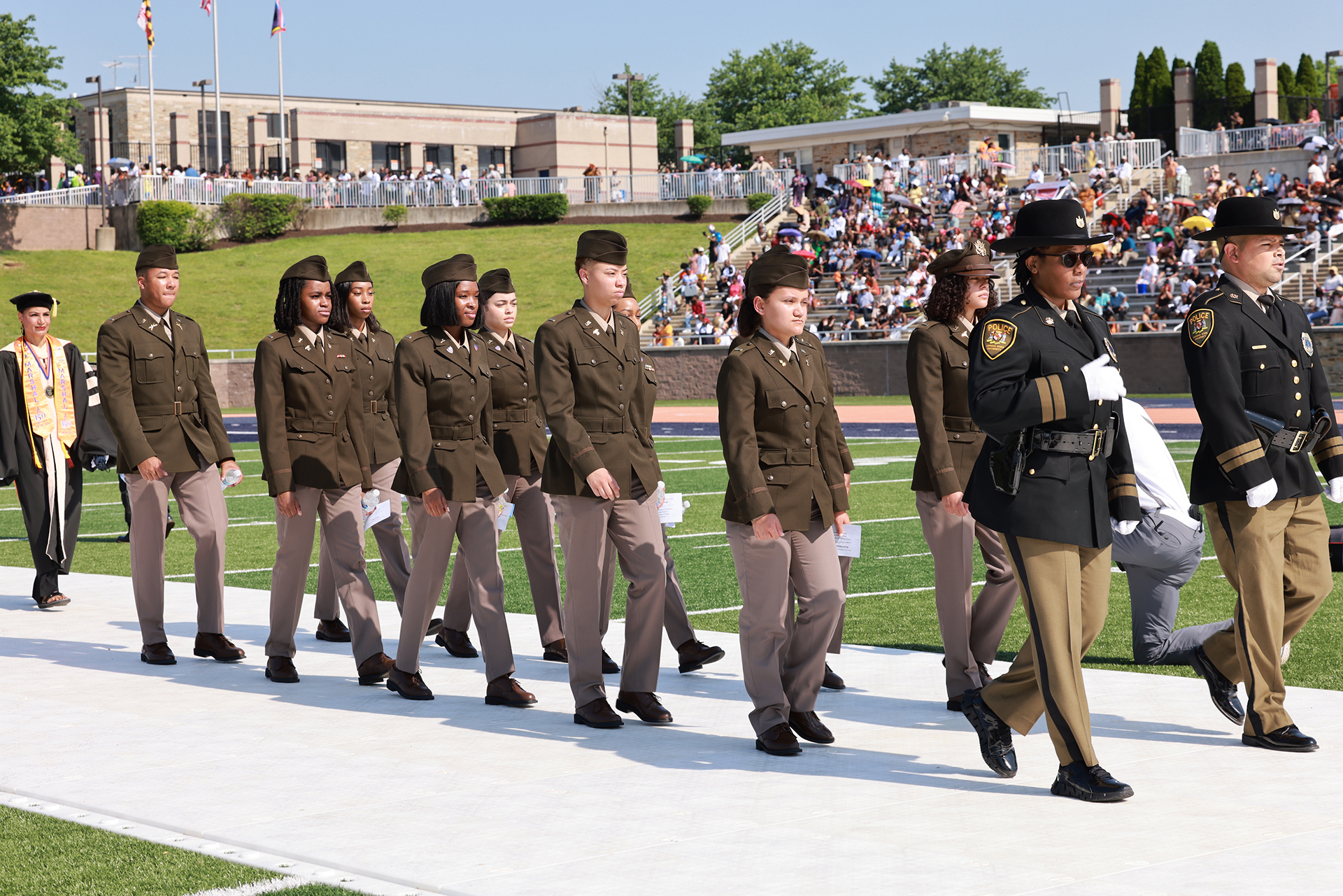 But, soon, some personal challenges added to her desire to leave the Army, and she filled out her paperwork to resign, twice. 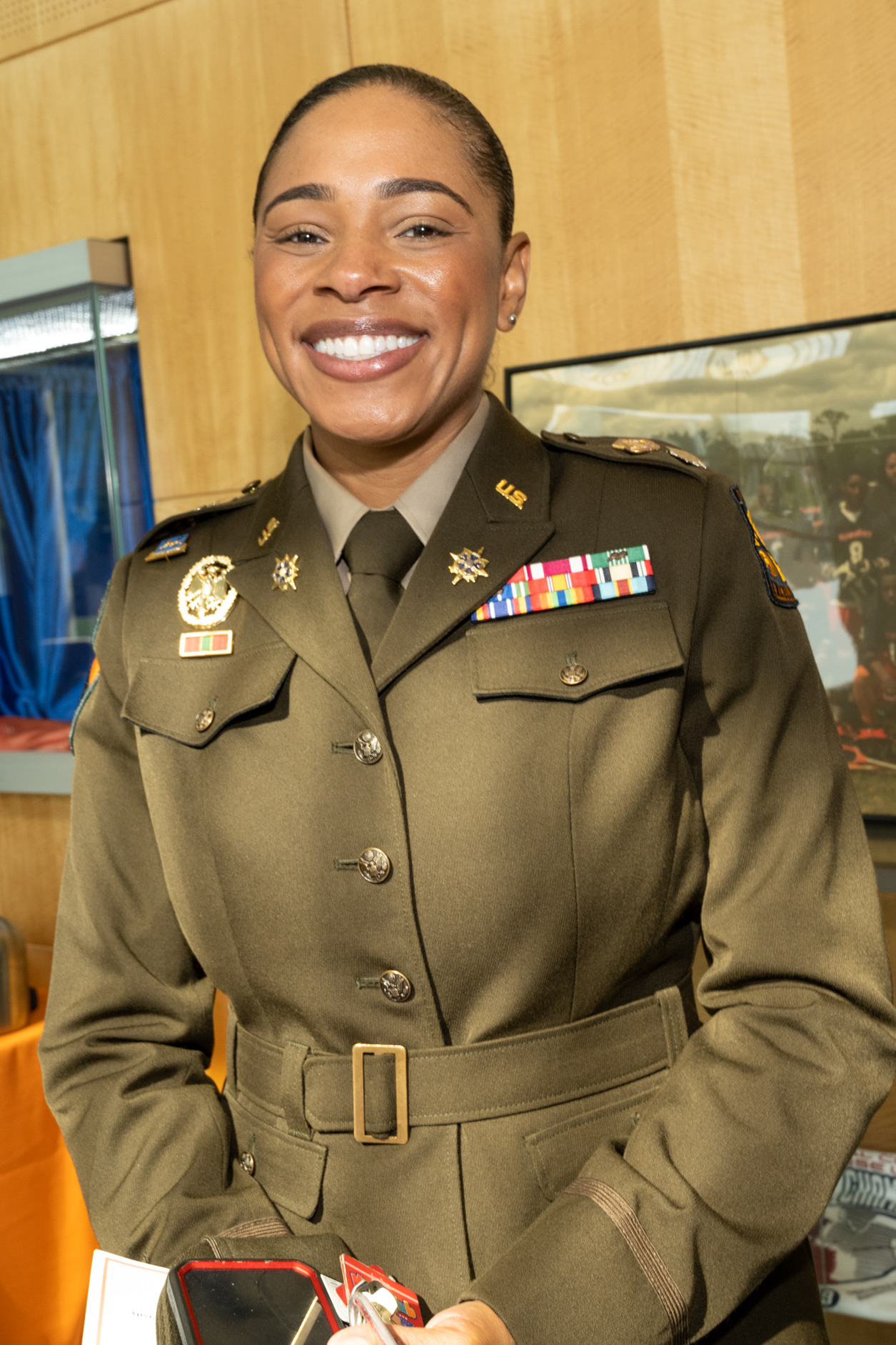 “When I divorced, I started looking at my career a little differently,” Lt. Col. Morgan recalls. “I was working as a captain (evaluating intelligence systems) at Aberdeen Proving Ground, and I had an epiphany one day. I said to myself, ‘I like this career. I’m good at this career. So be good at it.’ And then, I just started to care more and be very deliberate about garnering my career and focusing on how to go to the next rank.”

Today, her stellar resume reflects that long-ago change of mind. Among the many highlights of her career, she has served as a military intelligence company executive officer and platoon leader in support of Operation Iraqi Freedom, as the intelligence officer in charge of a Field Artillery unit in Hawaii and as a brigade XO and joint operations officer for the Defense Programs Support Activity. Along the way, she has received many military awards and decorations, among them a Bronze Star. When she achieved her current rank, she felt she had earned the promotion.

“In the Army, you get a report card every year. You need at least three ‘A’s to be promotable. So in my six years as major, on each report card I had six ‘A’s. I expected to be promoted, because I had done everything in my power to make it to lieutenant colonel,” she says. “But you never know until you see your name on that list.”

Her current position in Morgan State’s and Coppin’s State’s Departments of Military Science, likewise, came after a long, deliberate push to achieve it. Having dreamed of returning to MSU to teach in the ROTC program since early in her career, she eventually applied three times before she was accepted.

“When I briefed the president’s cabinet last year, I told Dr. Wilson that it was 20 years ago to the day that I came to Morgan in 2000 for freshman orientation,” Lt. Col. Morgan recalls. “So it was 20 years later that I returned, and as I walked the campus, I actually teared up a little bit. I remembered this bright eyed, bushy tailed, young, naïve teenaged girl coming here. And then to come back as a tried and true, battle-tested officer was an emotional moment.”

Her job is tough, she admits: employed by the Army, she has an abundance of administrative and educational responsibilities at Morgan State and Coppin State, and she answers to President Wilson as well as two military bosses, one being the Cadet Command commanding general. But she says it’s a job she loves, one that allows time for a full, happy family life with her current spouse, who serves as executive director of admissions at The Maryland Institute College of Art, and the couple’s two sons, aged 5 and 7. 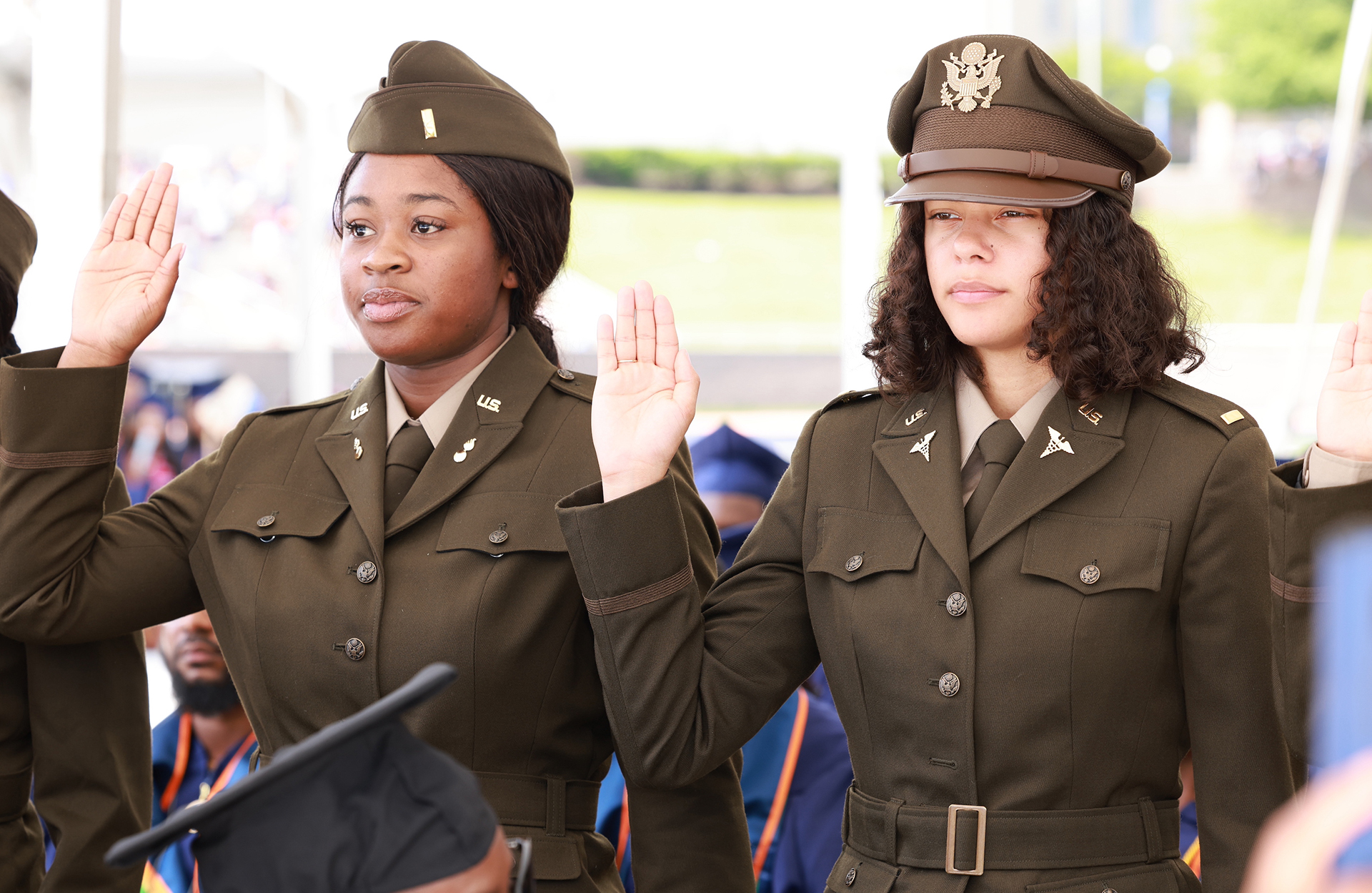 “I think sometimes my cadets are intimidated by who I am today. But they don’t understand, I was not always this person. The lightbulb didn’t actually shine for me in this career until about four years into it….” Lt. Col. Morgan says. “I always tell them I don’t expect perfection. I expect progress. All I need from you is to show up. You’ve already given me heart. You’ve already set an expectation. We’ll develop you along the way, with grit and grace.”

Her own progress continues: Lt. Col. Morgan will end her term at her alma mater earlier than anticipated to take a position at the Pentagon, serving as the military assistant to the Under Secretary of the Army. We celebrate her latest achievement, as she adds to the legacy of excellence of Morgan State University alumni.