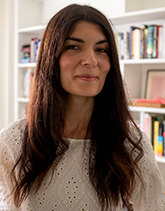 I teach Spanish courses at all levels and am an advisor to Spanish minors. I am also the Coordinator of the Latinx, Latin American & Caribbean Studies Program.

I will be on a research leave funded by the National Endowment for the Humanities from August 1, 2021-July 31, 2022. For any inquiries about the Spanish or LLACS minors, please contact my colleague in Spanish, Dr. Gonzalo Baptista.

Teaching and Research Interests
My teaching interests include all levels of Spanish language, Latin American cultural production and civilizations, and translation. My research centers on the relationship between ideology and cultural production, with special focuses on Gothic literature, horror film, and gender studies.