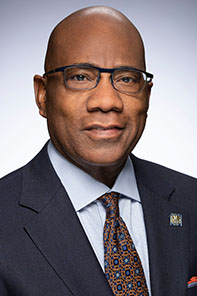 Dr. Wilson’s tenure as Morgan’s president, which began on July 1, 2010, has been characterized by great gains and an era of unprecedented transformation for the University. Among Morgan’s most recent highlights during his leadership are:

Dr. Wilson has authored two books and more than 20 articles in scholarly journals and other publications. Among the many honors and recognitions he has received for his work: he was named one of the nation’s top 100 leaders in higher education by the American Association of Higher Education in 1998; was selected as one of The Daily Record newspaper’s Influential Marylanders for 2011, 2016 and 2018 and has been inducted into its Circle of Influence; and was honored by the University of Alabama with an award for outstanding leadership in engaged scholarship in April 2011. He was also selected by the Baltimore Business Journal as a top 10 CEO in 2019 and was inducted into the Baltimore Sun’s Business Civic Hall of Fame in 2021.

In April 2019, Dr. Wilson was appointed to serve on the NCAA Board of Governors and Division I Board of Directors. He is also a member of the NCAA Finance Committee. In 2018, the Lumina Foundation elected Dr. Wilson to serve on its Board of Directors. Prior to this election, the U.S Under Secretary of Commerce for Standards and Technology had appointed him to serve a three-year term  as a member of the National Institute of Standards and Technology’s (NIST’s) Visiting Committee on Advanced Technology. He is the chairman of the HBCU/China Network, a member of the Maryland Cybersecurity Council and the Maryland Longitudinal Data System Governing Board and serves on the Boards of Directors of the Greater Baltimore Committee, the Association of Public and Land Grant Universities and the Association of American Colleges and Universities, for which he chairs the Finance Committee. In 2010, former President Barack Obama appointed him to his 11-member Board of Advisors on Historically Black Colleges and Universities. Dr. Wilson served on the Board of United Way of Central Maryland and on numerous other boards.

Dr. Wilson’s achievements as leader of Maryland’s Preeminent Public Urban Research University have clearly been strong, but it is the character he brings to the presidency, a character shaped by the intangibles of his background, that is perhaps most impressive of all. Dr. Wilson grew up with 10 siblings on a sharecropper farm outside the small town of McKinley, Alabama. Through hard work, tenacity and the encouragement of his father  and his teachers, he became the first person in his family to attend college. Dr. Wilson builds upon that legacy as the proud father of Nyere Brown Wilson, who earned a bachelor’s degree in sports administration at Morgan.

Dr. Wilson’s educational philosophy is to put the students’ experience first. As a leader, he is a consensus builder and a strong believer in transparency of process. His goal is to make Morgan a leader in producing the next wave of innovators in the U.S.

For more information on President David Wilson's background or to schedule an interview opportunity, contact the MSU Office of Public Relations & Strategic Communications at 443-885-3022 or email pr@morgan.edu.