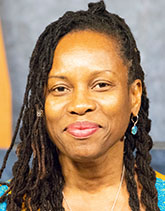 Welma Campbell Mashinini Redd, Associate Professor of Multiplatform Production, is a faculty member of the School of Global Journalism and Communication at Morgan State University. Back in the 1980s, this award-winning filmmaker anchored the newscast at the Liberian Broadcasting System (LBS), produced her own program, Arts and Artists and later headed the information unit at the Mano River Union, an economic group comprising three member states, Liberia, Guinea and Sierra Leone.

Professor Redd co-produced and edited official documentaries for Africa Day 2015, 2013, 2012, 2011 and 2010 commissioned by the African Ambassadors Group in Washington, DC which were screened each year at galas sponsored by the 54 states of the African Union.

She received Morgan's African Heritage Award for Botswana: An African Jewel, a documentary about the remarkable African country of Botswana, which had the fastest growing economy in the world for a few decades. This refreshing story about Africa was screened as the centerpiece at Morgan's 2010 Trans Africa Day Convocation.

Over the years, professor Redd has received several honors, including one from the following: the Mayor of Soweto in 2006 for the heroic acts of her late husband, Tsietsi Mashinini; the United Bassa Organization of Liberia, UNIBOA; the Bishop Emmanuel Johnson Awarded for her exceptional service to the people of Liberia as well as the people of African and the Diaspora in general.

The African/African Diaspora media and freedom of expression