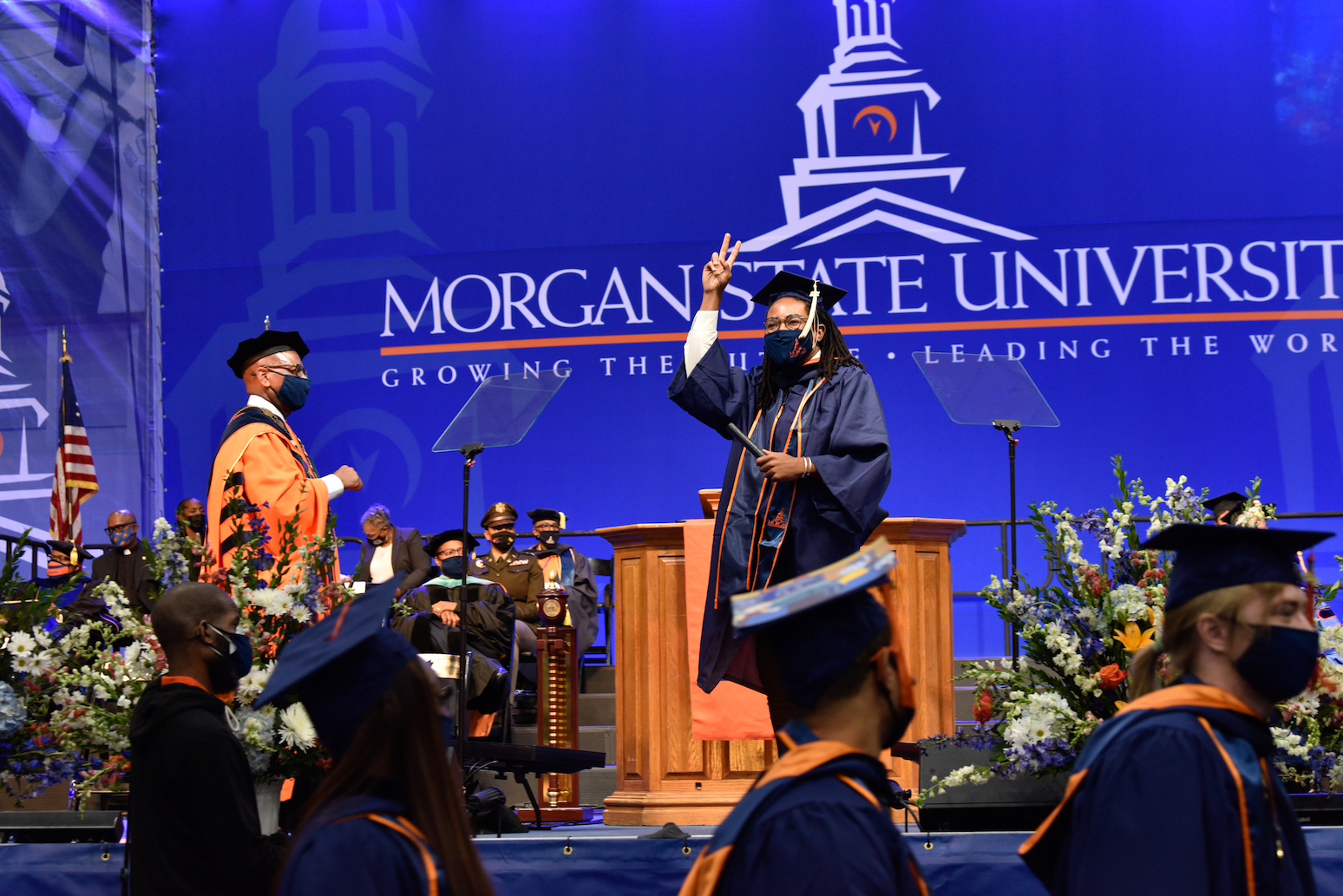 The power of Historically Black Colleges and Universities was on full display today at the eighth Fall Commencement Exercises of Morgan State University (MSU). More than 400 bachelor’s degree, master’s degree and doctoral candidates were awarded their diplomas at the festive event in Morgan’s Talmadge L. Hill Field House — the first MSU graduation ceremony since the University returned to full capacity with its in-person and online instruction and learning in September, for the Fall 2021 semester. White House Correspondent April D. Ryan, a graduate of Morgan (Class of 1989) gave a passionate, sometimes humorous keynote address about the increasing importance of HBCUs — including Morgan, Maryland’s largest such institution — in the current challenging time of pandemic and social change.

Ryan asked the degree candidates in the audience to consider the true value of their diplomas. 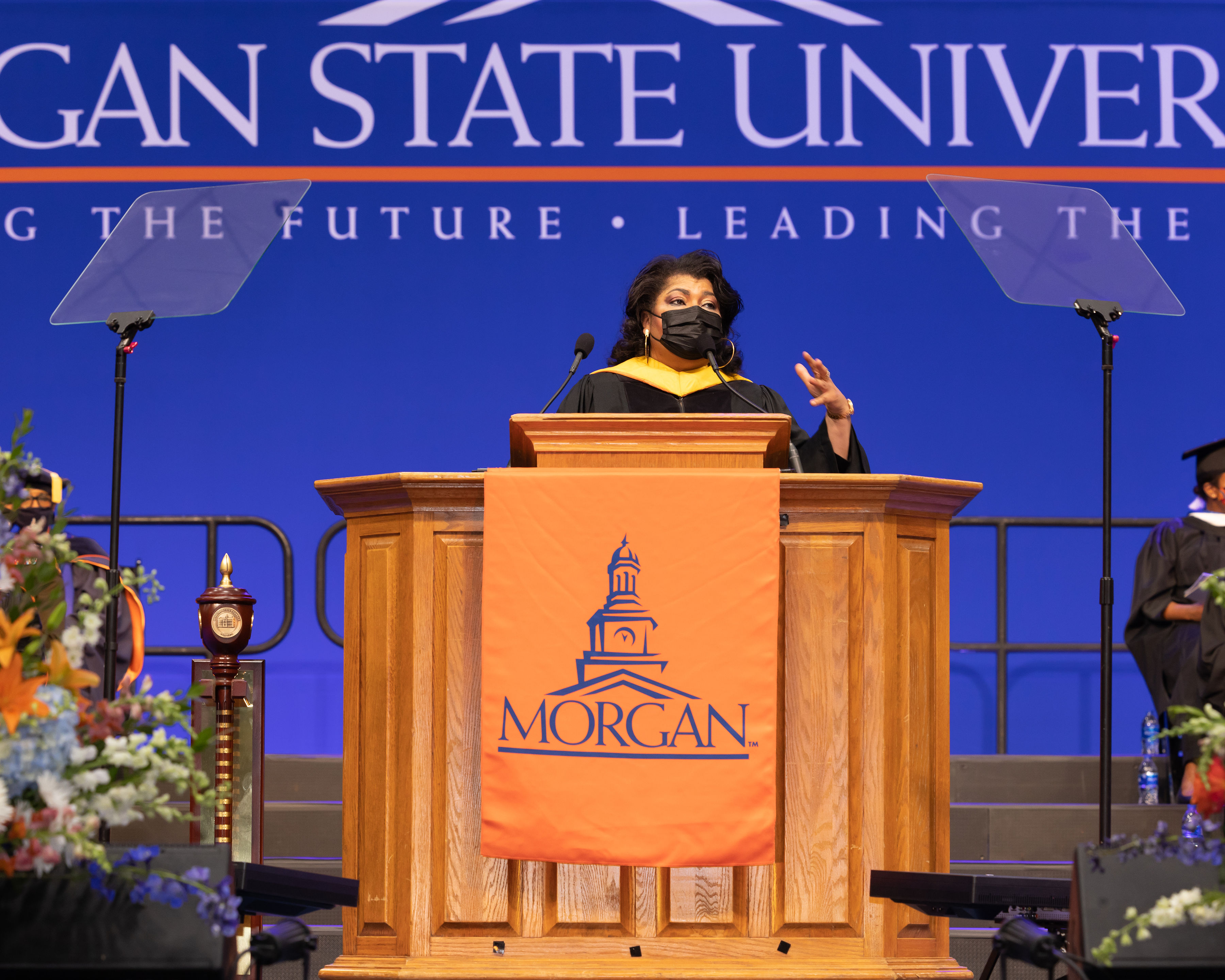 “You’re leaders,” Ryan continued, “What does that leadership look like? It looks like you. It looks like meeting the moment at a time when death was at our door. But yet…the news of Ahmaud Arbery, the news of, say her name, Breonna Taylor, the news of George Floyd made you stand up in the midst of the unimaginable and do the calling that Morgan State University has charged you to do: change the status quo of this society.”

“Harvard, Yale, they think they’re running things…. But let me tell you who’s running the world,” said Ryan, before citing a few of the many African-American leaders who were nurtured by HBCUs: Vice President Kamala Harris, White House Senior Advisor and Director of the Office of Public Engagement Cedric Richmond; U.S. Rep. Bennie Thompson, chair of the Committee on Homeland Security; House Majority Whip James Clyburn; and herself, April Ryan, the only Black female reporter covering urban issues from the White House, for the past 25 years.

“I’ll bet you when Kamala Harris was going through Howard University, she never imagined that she would be vice president of the United States or even U.S. senator. I’ll bet you so many of those others never imagined. It was unimaginable,” Ryan said, “but they met the moment and they kept rising to the top. That’s you…. When you stand in a moment like this, the sky is the limit.

“…You have the power that you don’t know, in your hands. I’m just waiting for you to unleash it,” Ryan continued. “Never let anyone tell you, you are less than. We’re running the world, literally.” 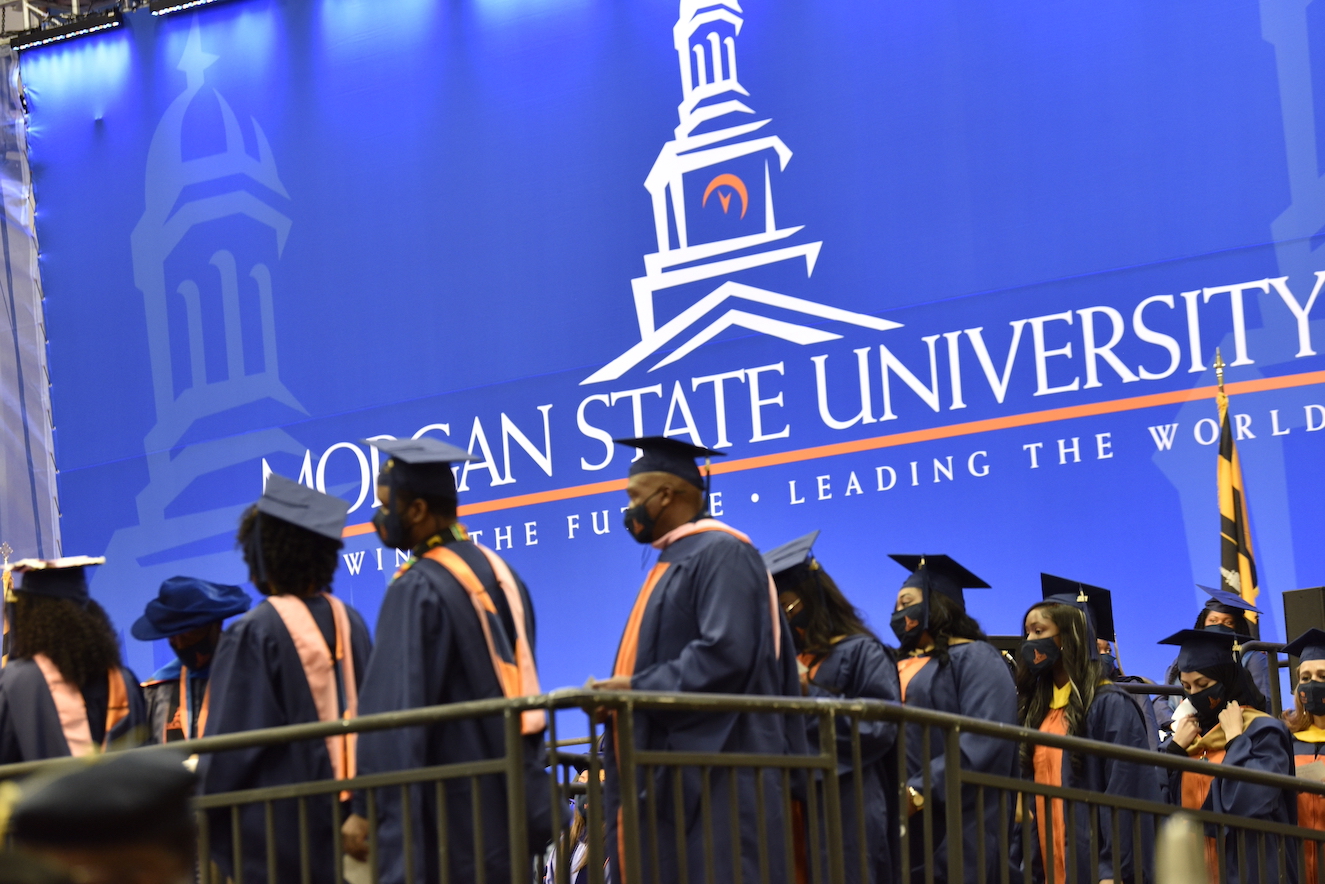 Fall 2021 saw a welcomed return to campus for the Morgan community, who—prior to the semester’s beginning—was largely remote due to the enduring COVID-19 pandemic. The return to campus was further heightened by an overwhelming demonstration of new interest in Morgan and its academic offerings. In the weeks prior to the start of the semester, the University experienced a record number of applications, ultimately translating in the largest incoming class of first-year students in the university’s history.

Across the nation, HBCUs have been experiencing a renaissance sparked by a social awakening that has led to increased funding by way of gifts and resource allocation, in addition to interests from degree-seeking students at all levels wishing to embrace the HBCU experience. As a result of this wave, Morgan achieved an historic enrollment high of more than 8,500 students this fall semester.

HBCUs, only 3% of all colleges and universities, graduate nearly 20% of African-American students and contribute nearly $16 billion to the U.S. gross domestic product each year, Ryan said, citing statistics from the White House. But HBCUs have traditionally received less than 1% of federal funding for higher education, she added. “That’s a problem. It’s a problem when you can create all this money but they don’t pay attention to you,” Ryan said.

Ryan closed with a call to action for her audience to provide financial support to MSU: “Now that you are moving to the next chapter, give back to Fair Morgan.” 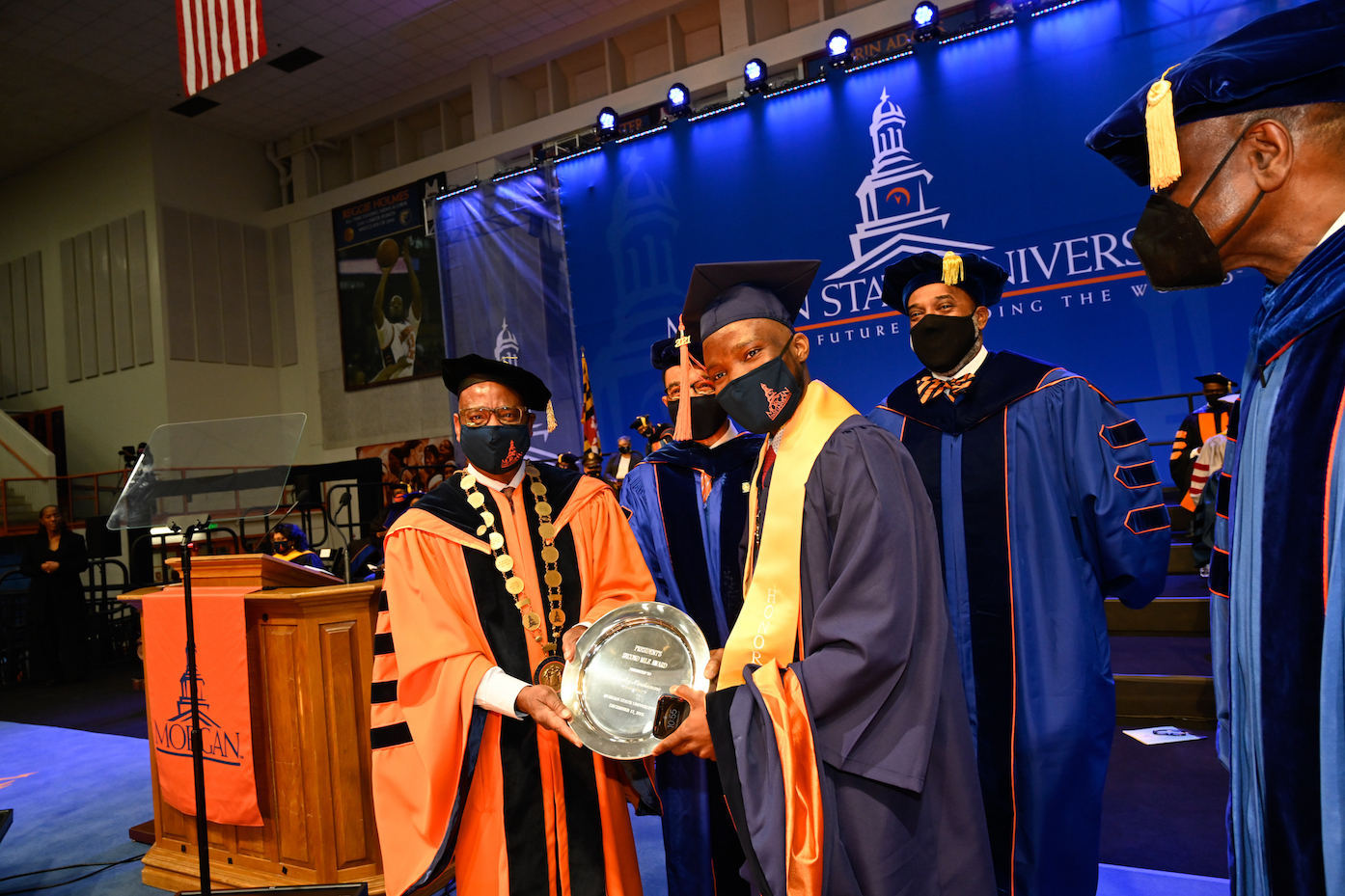 Lt. Col. Malika Morgan, U.S. Army, chair of the Department of Military Science at MSU and a member of MSU’s Class of 2005, presented the four bachelor’s degree candidates of the Fall 2021 class who were commissioned as second lieutenants through Morgan’s Bear Battalion ROTC program, the largest such program in Maryland.

In her Salute to the Graduates, Senior Class President Jada Prater found two apt words to describe her Class of 2021 peers: “indefatigable” and “unprecedented.”

“We have experienced two of the most unconventional and unorthodox years in Morgan State University’s history, yet we have proven ourselves to be resilient individuals in a time when all the odds seemed to be against us. But with hard work, dedication and faith, we prevailed,” Prater said. “…We have overcome unbelievable obstacles, hardships and loss, and we are here today, preparing to graduate from our beloved Morgan State University. …We have made it to the finish line. We’ve been trained by the best and made by the illustrious community that is Morgan State University. Class of 2021, continue to be an agent of change.”

Continuing his tradition in the extraordinary times, President Wilson admitted to pushing the new graduates beyond their limits during their academic careers at Morgan.

“…We have summoned you here at Morgan to reach for those stars and then we have...cautioned you along the way, that perhaps when you grab that star, and we know you will, that perhaps your aspiration was not great enough,” Wilson said. “…We have urged you to be committed to growing the future, so you will be in a position, without doubt, to lead this world.”

For highlights of the 2021 Fall Commencement Exercises, click here to view a curated album of images online, or view the ceremony in its entirety online here.