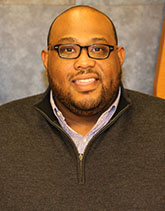 He completed his first non-fiction book in 2014, partnering with N.C. Central University head coach, LeVelle Moton, as the co-author of The Worst Times Are the Best Times. The book tells the stories of Moton's personal childhood experiences with a relatable and motivating perspective. Each chapter includes "Inside the Locker Room" and "Chalkboard" sections, detailing lessons learned and calls to action the reader can apply to his or her own life, respectively.

Robinson, 40, covered ACC college football and basketball as a beat reporter for the Raleigh News & Observer and has written about high school football, covered Final Fours and interviewed athletes from the NFL, NBA, NHL and major league baseball.

In 2014, he won the Society of Professional Journalists' Dateline Award for Excellence in Local Journalism for a story in the Washingtonian Magazine on NBA all-star John Wall. He also has won awards from the Associated Press Sports Editors, the N. C. Press Association, The News & Observer and the National Association of Black Journalists.

A native of Washington, D.C., Robinson grew up playing tennis, watching countless hours of basketball and attending D.C. Public Schools. He lives in his hometown with his wife, Candice Watkins Robinson, and their son Edward G. Robinson IV.