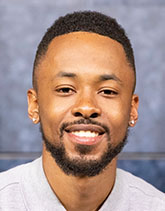 An innovator and visionary with a keen eye for detail, Malik Edwards takes pleasure in telling stories that engage his audience. Edwards is the producer for Morgan State's Digital Media Center. He received his Bachelor of Science in broadcast and integrated media from Morgan State University and Master of Arts in journalism from the City University of New York, Graduate School of Journalism. While studying in New York, he interned with NBC News and MSNBC while producing relevant media content for African American and Hispanic communities. Edwards also produced documentaries, commercial marketing videos for corporate entities, and assisted with film production on a documentary showcased at the Tribeca Film Festival. He also worked with USA Today and in 2016, was awarded Morgan State's distinguished alumnus of the year award. Edwards is also a member of the National Association of Black Journalists. In his spare time, he enjoys watching and playing sports, engaging in the latest computer technologies, and watching historical documentaries.