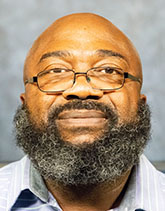 Bachelor of Business Administration -- Insurance with a concentration in Actuarial Science, Howard University

Landis Whitehurst is the Budget Officer for the SGJC since January of 2016. He previously worked in the College of Liberal Arts in the same capacity since August of 2006. Prior to that, he was in the insurance industry primarily as a Senior Underwriter for both MetLife and American Skyline and as an agent for AFLAC.