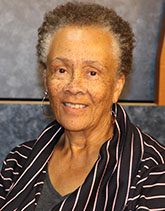 Jacqueline "Jackie" Jones is Dean of the School of Global Journalism & Communication at Morgan State University.

A veteran newswoman, Jones has worked in a variety of capacities in newsrooms around the country, including the (Baltimore) Evening Sun, Detroit Free Press, New York Newsday, The Philadelphia Daily News, The Milwaukee Journal Sentinel and The Washington Post. While at New York Newsday, she was a member of the newsroom team that won a Pulitzer Prize in 1992 for Spot News Coverage.
Jones has served on the board of directors of the National Association of Black Journalists (NABJ) and represented the NABJ on the Accrediting Council on Education in Journalism and Mass Communication for more than 25 years. In addition, she has worked as a senior lecturer at Penn State University and has taught as an adjunct professor at several institutions, including New York, Wayne State and Howard Universities.

As Chair, Jones has overseen the development of the department's Digital Newsroom as a center for student training and immersion reporting opportunities on multiple stages, from the coverage of the disturbances in Baltimore in the wake of the death of Freddie Gray to Maryland election coverage to reporting from Cuba and Greece.

MMJN's notable reports include a multimedia report on Baltimore's youth curfew law and a report on sexual assault on campus. Bridging Selma and Broken Plate, collaborations between SGJC and West Virginia University's Reed College of Media, are part of a partnership looking at social justice issues on a national scale.