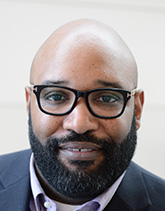 Evan Richardson, a native of Newark, New Jersey, is the Assistant Dean for the School of Architecture & Planning at Morgan State University (MSU).

Before joining MSU, Evan worked in Baltimore's Mayor's Office of Neighborhoods as a Neighborhood Liaison, where he assisted community groups in the implementation of neighborhood action plans and programs.

Prior to the Mayor's Office, Evan was employed as a Program Coordinator with the Neighborhood Design Center (NDC). In this role, Evan recruited volunteers for various community design projects in Baltimore City and Baltimore County.

Evan's interests include community design and volunteerism. In 2008, Evan ended his 4-year tenure as a Board of Directors for the Herring Run Watershed Association in Baltimore. The following year, Evan was appointed, by Governor Martin O'Malley, Commissioner for the Maryland Commission for African American History and Culture. And in 2013, Evan joined the Board of Directors for NDC, where he served as Board President in 2016-2018.

A long time resident of Baltimore City, Evan earned his bachelor's degree in Industrial Technology from North Carolina A&T (@ncatsuaggies) in Greensboro, NC and his master's degree in Landscape Architecture (@land.arch.morgan) from MSU in Baltimore.