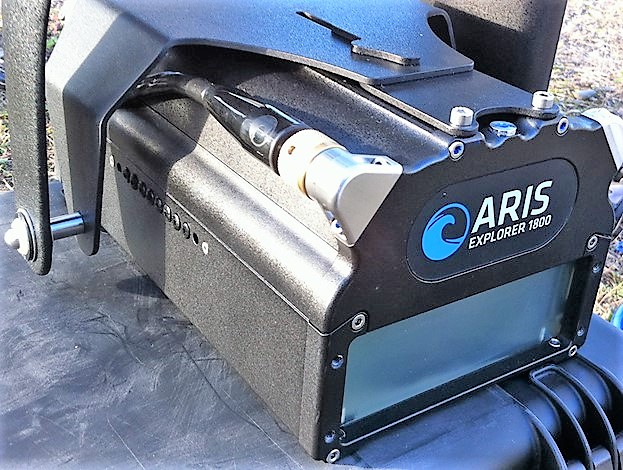 Dr. Chunlei Fan, an Associate Professor with the Biology Department, has been conducting research at PEARL since 2004. Currently, Dr. Fan is collaborating with researchers at the University of Maryland Center for Environmental Science in the study of fine-scale spatial and temporal dynamics of the Atlantic sea nettle (Chrysaora quinnquecirrha) in the Chesapeake Bay. Since the summer of 2016, they have deployed an innovative advanced sonar imaging systems (ARIS) to explore key scientific questions on how climate variability affects shifts in spatial and temporal distributions of economically and ecologically important species by altering river discharge and nutrient loadings. The ARIS system is a non-destructive, near-video quality sonar imaging technology that samples spatial distribution of zooplankton and ichthyoplankton simultaneously and continuously, across various estuarine habitats. This research has involved several undergraduate summer interns and two Ph.D students, providing them extensive hand-on experience. They have published and presented their research findings in peer-review journals and scientific conferences.

Dr. Elka T. Porter, Assistant Professor of Environmental Science at the University of Baltimore has been a Visiting Researcher at PEARL during each summer since 2015. Dr. Porter studies the effect of bivalves in interaction with water flow on water quality and ecosystem processes. She recently published a paper on the design and performance of the Shear Turbulence Resuspension Mesocosm (STURM) facility located at PEARL (Porter et al. 2018a). The STURM system produces realistic shear and turbulence for benthic-pelagic coupling studies and mimics tidal or episodic resuspension in studies to address physical-biological-chemical interactions. PEARL seawater access, facilities support, and summer student research allows 6-week long mesocosm studies in the STURM systems at PEARL. 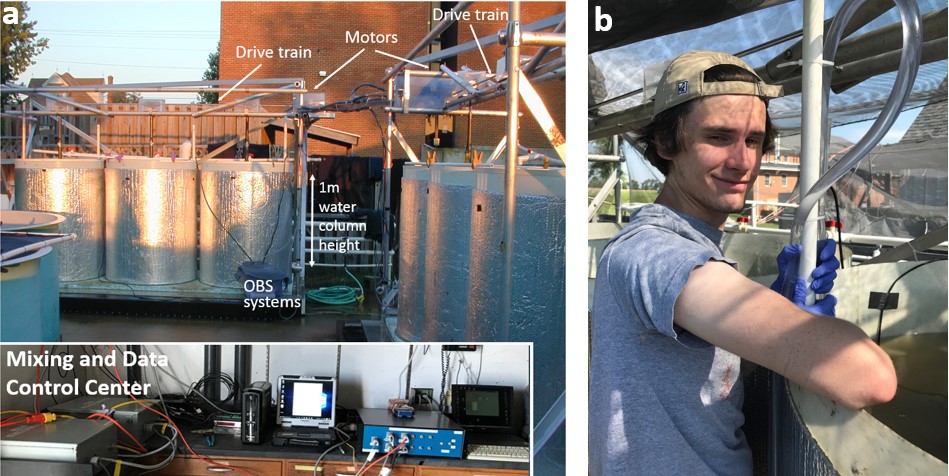 In addition, Dr. Porter just published an experiment with researchers from PEARL and undergraduate summer students studying the effect of oyster biodeposit resuspension on water quality and ecosystem processes in the STURM systems (Porter et al. 2018b). This kind of research helps to better assess oysters as a Best Management Practice (BMP) for the Chesapeake Bay. Further studies in collaboration with Dr. Lawrence P. Sanford, Dr. Jeffrey C. Cornwell, both Horn Point Laboratory, UMCES, and Mr. Richard Lacouture, PEARL, are ongoing. In addition, Dr. Porter is a participant in the Chesapeake Bay Program STAC* workshops (Water Clarity Group) and her research with the STURM systems has led to insights on water clarity issues for the management community.

* Scientific and Technical Advisory Committee for the Chesapeake Bay Program

Dr. Thomas Ihde has been heavily involved in recent advances toward the development of measures of forage availability in the Chesapeake Bay system as a whole, and greater awareness of the importance of forage species to our highly-valued populations of crabs, fish, and oyster in the Bay. Dr. Ihde co-led with Dr. Edward Houde a large team of researchers in a STAC* workshop on forage at the end of 2014. That workshop report has been the roadmap for much of our recent progress toward understanding our current forage dynamics and longer-term trends. That workshop identified the most important forage groups for predators in the mainstem of the Bay. A recent article describes the survey work that the workshop analysis was based on -- it can be read here. The workshop also identified an urgent need to integrate the wealth of information that we already have on those forage species and develop "metrics" (or measures) of these important animals to better understand if there are enough available to feed the animals that people like to catch. That need was recognized by our fishery managers in the Bay jurisdictions (Maryland, Virginia, and the Potomac River), who identified funding for two consecutive projects to develop those metrics. Two research teams at UMCES received those grants, see the first year project report here, and the second project is finishing up now. The report by Ihde et al. (2015) also recommended that the Chesapeake Bay  Program partners produce a short educational video that describes what forage is, and why it is so important. Dr. Ihde helped direct the production of that video with colleagues at the Chesapeake Bay Program. That video can be viewed here.

* Scientific and Technical Advisory Committee for the Chesapeake Bay Program