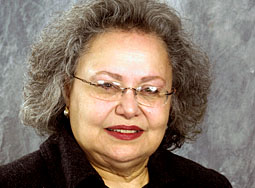 PhD, University of Texas at Austin

Biography
Dr. Rosemary Gillett-Karam is a tenured Associate Professor of Higher Education in the Department of Advanced Studies, Leadership, and Policy, now Director of the Community College Leadership Doctoral Program. Prior to her arrival at Morgan, October, 2002, Dr. GK was, for five years, President of Louisburg College, Louisburg, NC where she introduced their nationally acclaimed Learning Partners Program, focusing on students with learning disabilities. Serving North Carolina State University between 1992-1998, Dr. Gillett-Karam was a tenured Associate Professor in their Higher Education and Community College Program. While at NC State, Dr. GK was co-editor of the juried Community College Review. She also guided the Fellows Program, part of a $13 million Kellogg award to develop new and ethnically diverse leaders for American community colleges-several of these fellows are now themselves presidents of community colleges.

Dr. Gillett-Karam has written extensively, several of her more well-known books include the following, Shared Vision; Diversity and Underrepresentation; Teaching as Leading; The Department Head; Women in the Community College; and Ethics in the Academy. Her newest book documents the history of the American Association of Community Colleges (AACC). She has written numerous chapters in books and many journal articles. In addition, she has served on national committees and boards, such as American Association of Community College Women, Council of University Professors, and the Research Council for AACC. At the University of Texas at Austin, Dr. Gillett-Karam twice received national fellowships both as Earhart Fellow (1971-1973) and a Kellogg Fellow (1985-1988). At UT, she held a post-doc position between 1988-1991. After completing her doctorate, Dr. Gillett-Karam was named "Emerging Scholar of the Year" by the American Association of Community Colleges. She has been named a "Distinguished Graduate" by the University of Texas at Austin and is one of five finalists for honored graduate at Stephan F. Austin High School for 2009.

At Morgan State University, Dr. GK most recently served as the Program Coordinator for the Higher Education and Urban Ed Doctoral Programs before she was named Director of the Community College Leadership Doctoral Program (CCLDP). The Higher Ed program was a new program in 2002; therefore, she helped in shaping the direction of that program. Dr. GK has also taught and developed courses in the Higher Ed, Community College, and Urban Ed programs. She serves on several Morgan committees including the Institutional Review Board, the Professional Development Committee, the Accreditation Steering Committee, University Council, Academic Council, and various department committees. While the RDHE program can boast 100% of its first class as graduates Dr. GK as the first Director of CCLDP, worked to make the development of that program her number one priority, seeking to expand its grant and fund raising efforts, extend its on-line offerings, and continue its national exposure. She believes, by working as a team with faculty, students, and community college leaders, that the principle goal of the CCLPD is the rich cultivation of community college research and scholarship.